...the Vikings navigated the sea when it was cloudy by using a quartz 'sun-stone' to 'see' the sun through the clouds. In fact, the substance probably most commonly used for a 'sun-stone' I was iolite cordierite, otherwise known as 'water sapphire', which is found in Scandinavia. It is bipolar, or dichroic, and a thin slice of it would polarize the light seen through clouds so that the sun's location could be readily determined, thereby effectively 'abolishing' the clouds as an obstacle to maritime navigation. (The Crystal Sun)

Here we have an unambiguous description of glass balls filled with water being used for reading purposes by the Romans. In fact, these were extremely common in Roman times, and I have encountered about 200 of them, either whole or fragmentary, in museums. They were mass-produced, and very cheap. For it was in Roman times that the mammoth glass industry made mass-distribution of magnifying aids possible, and they no longer had to be obtained in the expensive form of ground and polished rock crystal. (The Crystal Sun) 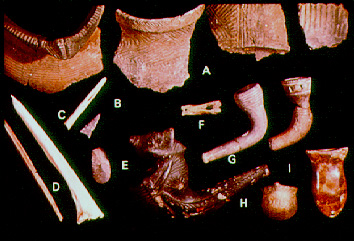 Huron-Petun Iroquois Culture Artifacts.A. Fragments from the rims of typical pottery vessels. B. Stone and bone arrowheads. C. Bone dagger made from one of the human forearm (ulna) bones. D. Bone awl. E. Scraper. F. Ground deer toe bone. G. Typical pottery smoking pipes. H. Juvenile vessel made by a small girl learning the potter's art. I. Stone pipe to which a wooden stem would have been attached. Notice the small hole in the base of the pipe; the bowl was ttached to the stem by a string and could not accidentally be broken or lost if it became detached from the stem. Courtesy: National Museum of Man, National Museums of Canada

Stoltman has listed some characteristics that define Mississippian culture, including: distinctive pottery in shell-tempered wares, sometimes in the form of animals, and often beautifully incised, polished, or in other ways decorated; use of the bow and arrow, with distinctive small, triangular stone arrowheads... (Patterns in Prehistory)

…between AD 900 and AD 1200, many other Mesoamerican elements were imported, including cotton textiles, certain ceramic motifs, pyrite mirrors, effigy vessels, cast copper bells, ear plugs, etched shell ornaments, and even parrots and macaws--probably imported from the south and kept and prized for their feathers. (Patterns in Prehistory)

A 700-year-old Norse settlement has been positively identified in Canada,... an Atlantic coastal site high above the Arctic Circle. There, they unearthed stone remains closely resembling Viking house foundations more commonly found in Greenland. ...she noticed two pieces of unusual cord that had come to light during a Baffin Island dig some decades before. Neither strand was made of animal sinew native hunters typically twisted into cordage, but yarn as characteristically woven by Viking women in medieval Greenland. she and her colleagues retrieved more local wools that had been turned into yarns—a practice unknown to Canadian aboriginals—together with a whalebone shovel like those fashioned by Greenland Vikings for cutting sod used as roofing material, and pelts belonging to Old World rats, plus large stones cut and shaped by someone skilled in European masonry techniques; Baffin Island natives did not work with large or cut stone. Most decisive were whetstones used for sharpening tools according to medieval European traditional methods. When their worn grooves were examined by energy dispersive spectroscopy, the Geological Survey of Canada detected microscopic streaks of bronze, brass and smelted iron—all diagnostic of Viking Age metallurgy. Carbon-datable materials from the Tanfield Valley centered on a mid- to late-14th-century time frame, although additional valid periods as much as 400 years earlier were also obtained. (The Lost History of Ancient America)

... researchers have also determined that copper mining activity resumed again around 900 CE. This date corresponds perfectly with related evidence of a Viking presence in the area around that same date. (The Giants Who Ruled America)