Erectus eventually colonized most of habitable Europe and Asia, although large tracts of northern Europe would have been too cold to settle on. The one constant in the Diaspora is the stone tool kit: Acheulian bifaces only went out of fashion around 250,000 years ago, over a million years after they were first crafted in Africa. Their distribution shows that half the world's population shared and passed on the knowledge of making these large stone tools. (In the Footsteps of Eve)

Primitive humans who inhabited the coast of South Africa 165,000 years ago and lived on a diet rich in shellfish could be the original ancestors of everyone alive today, a study suggests. The people who lived in high caves at Pinnacle Point, overlooking the Indian Ocean near Mossel Bay, harvested and cooked mussels, used red pigment from ground rocks as a form of make-up and made tiny, bladed tools.  Experts say they are very likely to be the ancestors of Homo sapiens, the anatomically modern human species which migrated across the world.

The dig at Pinnacle Point unearthed the remnants of charred shellfish, intermingled with fine stone tools and ochre pigment, which has been linked with the expression of symbolic behaviour – such as burial ceremonies – in early humans. The tools included small "bladelets" which would have been attached to sticks to form a pointed spear, or lined up like barbs on a dart. Charred shells suggest the shellfish were put on hot embers to open them for eating. (39)

There is also evidence in Africa of long-distance exchange of raw materials 140,000 years ago, as well as surface mining 100,000 years ago. The making of blades and the processing of pigments, using grindstones, is 250,000 years old. (Before the Pharaohs)

Just south of Kimberley, Peter Beaumont of the Kimberley Museum has found what must be one of the world's largest accumulations of stone tools at a single site. In a space less than that of two football fields, he estimates that there are over 10 million hand axes and other stone tools. Further west, near Uppington. there are literally tens of thousands of hand axes, choppers, cores, and other elements of this culture lying scattered across almost every erosional surface you chance upon. While this sort of density of tools is not common, the number of artifacts that one can find from this time period illustrates the success of these archaic Homo sapiens. Surprisingly, there are relatively few sites anywhere in Africa with good, undisturbed archeological sequences that we attribute to archaic sapiens, so our understanding of their behavior is limited. (In the Footsteps of Eve)

A dramatic and wholly unexpected glimpse of the nondurable part of early Eurasian tool kits was recently recovered under exceptional preservational circumstances at Schoningen in Germany. There, in lakeside deposits nearly 400,000 years old, a series of carefully made wooden throwing spears (javelins) attest to the role that perishable artifacts must have played in the conquest of midlatitude Europe. (The First Americans)

Archaeologists on the island of Crete have discovered a set of tools they believe prove that man sailed the sea tens of thousands of years earlier than previously thought. A Greek Culture ministry statement said experts from Greece and the U.S. have found rough axes and other tools thought to be between 130,000 and 700,000 years old close to shelters on the island's south coast. Whoever made the tools must have traveled there at least 40 miles by sea. "The results of the survey not only provide evidence of sea voyages in the Mediterranean tens of thousands of years earlier than we were aware of so far, but also change our understanding of early hominids' cognitive abilities," the ministry statement said. The previous earliest evidence of sea travel was 60,000 years ago, so the findings upset the current view that human ancestors migrated to Europe from Africa by land alone. (155) 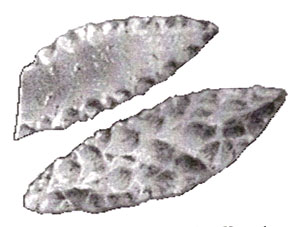 In the 1960's sophisticated stone tools (left) rivaling the best work of Cro-magnon man in Europe were unearthed by Juan Armenta Camacho and Cynthia Irwin-Williams at Hueyatlaco, near Valesquillo, 75 miles southeast of Mexico City. ...these articfacts do have a very controversial feature: a team of geologists who worked for the US Geological Survey gave them ages of about 250,000 years. These geologists said four different dating methods independently yielded unusually great ages for the artifacts found near Valesquillo. The dating methods used were (1) uranium series dating, (2) fission track dating, (3)tephra hydration dating, and study of mineral weathering. (The Hidden History of the Human Race) 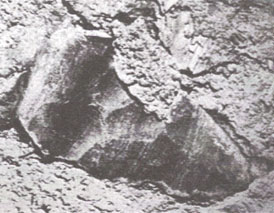 A Folsom blade embedded in the lower surface of a travertine crust from Sandia Cave, New Mexico. The layer of travertine is said to be 250,000 years old.