The heartland of this new style was the grassy hunting ground of North Africa, where today there is only desert, and the type station is Capsa (Gafsa) in Tunisia. Its characteristic artifact is a tiny geometric flint, chiefly in trapezoid, rhomboid, and triangular forms, commonly known as a microlith, which has been found distributed from Morocco to the Vindhya Hills in India, and from South Africa to Northern Europe. (Primitive Mythology)

It was, however, the sudden decline of the Isnan's technological skills that really began to capture my imagination, for around 10,500 BC the grinding-stones and sickle blades used in the production of cereals suddenly disappear without trace, only to be replaced by much cruder stone implements of the sort used by the other, less advanced cultures of the Nile valley. Agriculture then totally disappears from Egypt until it is finally reintroduced, possibly from Palestine, around 5500 BC, some five thousand years after the Isnan lost their advanced capabilities. Even stranger is the fact that, after 10,500 BC, agriculture appears nowhere else in the Old World for at least another thousand years. (From the Ashes of Angels)

At Rochereil…Jude found that the long, cleanly struck, Magdalenian blades reflected a “veritable souci d' elegance,” but remarked that one searched in vain for any element that could serve as a weapon. Even the carved antler implements believed to have been harpoon heads often had rounded tips at Rochereil,”hardly favorable for penetration.” Common to many Middle to Late Magdalenian deposits, the harpoon heads are more lethal elsewhere, but the most carefully carved and decorated of these pieces may well have served non-utilitarian purposes. (Plato Prehistorian)

The arming of the Magdalenians also seems to have coincided with the gradual abandonment of the decorating of inner chambers of the caves. Although the execution of portable art would continue for a thousand years before it too vanished, the very rare cave paintings that can be dated to the tenth millennium are more often found at entrances than in the deep interiors of the caves. Weapons continued to increase, art to decline, until in the ninth millennium the decay of Magdalenian culture was complete. (Plato Prehistorian)

One of the most remarkable features of the last ice age is the success of living on the plains of Russia. While northwestern Europe became uninhabitable during the LGM, in Russia occupation of a number of sites from the River Don to eastern Siberia appears to have continued unabated. An archaeological site on the Aldan River, a tributary of the Lena in eastern Siberia, was occupied by a possible ancestor group to palaeo-Arctic people of North America. The people who lived in Dyuktai Cave were hunter-gatherers and fishers and used triangular stone points that have become known as the 'Dyuktai culture'. Occupation levels have been dated between 33 and 10 kya...(Climate Change in Prehistory) 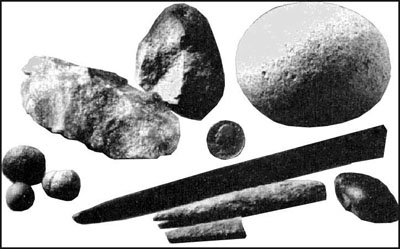