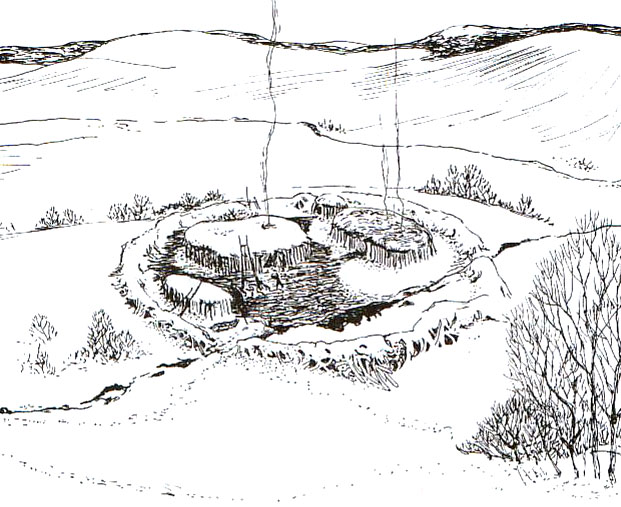 The reconstruction of a 27,000-year-old settlement at Dolni Vestonice illustrates how people used shelters to colonize the frigid plains of eastern Europe. (Patterns in Prehistory)

Named after the cave at La Gravette in the Dordogne, in southwest France, the Gravettian culture existed between twenty-eight thousand and twenty-two thousand years ago. Like their predecessors, their culture was widespread. Settlements ranged from southwest France to Wales and eastern Europe. Artifacts have also been found in mammoth hunters' campsites in Russia. Although regional differences exist, Gravettian lifestyles are remarkably similar wherever artifacts have been found. Speculatively, communication between settlements may account for such similarities. When Gravettian culture appeared, a significant behavioral shift emerged. Large, organized settlements, comprising mostly simple tent structures, were founded in open lands. Animal remains suggest that some settlements were occupied for most of the year. Other settlements were quite elaborate, such as Dolni Vestonice, in modern-day Czechoslovakia. There, huts were made from mammoth bones and included storage pits for food preservation. (Before the Pharaohs)

The occupation of northern Russia and Siberia by at least twenty thousand years ago depended on many advances: elaborate houses (marked by postholes, pavements, and walls of mammoth bones), with elaborate fireplaces; and stone lamps to hold animal fat and light the long Arctic nights. (The Third Chimpanzee)

In what was the treeless wilderness of the central European Plain just before the LGM, extensive archaeological evidence has been found of lengthy settlement between roughly 27 and 24 kya. The sites of this occupation are at Dolni Vestonice-Pavlov in southern Moravia. An excavated building shows that it was first dug out from a slope and then the roof was supported with timber set into postholes. The low walls were made of packed clay and stones. (Climate Change in Prehistory) 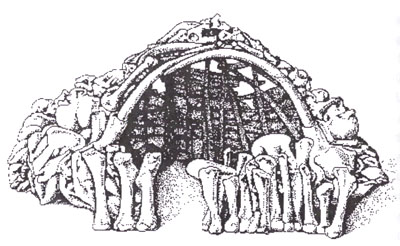 …the megalithic site of columnar basalt visible on the uppermost terraces of Gunung Padang is simply the latest episode in its long story and how Danny and his team used seismic tomography, ground-penetrating radar and other remote-sensing technologies to show that the man-made structures go down tens of meters beneath the surface. Core drilling into these buried structures was undertaken producing organic materials with impeccable provenance that yielded ever more ancient carbon dates extending back, ultimately to more than 22,000 years ago—before the end of the last Ice Age…(Magicians of the Gods)