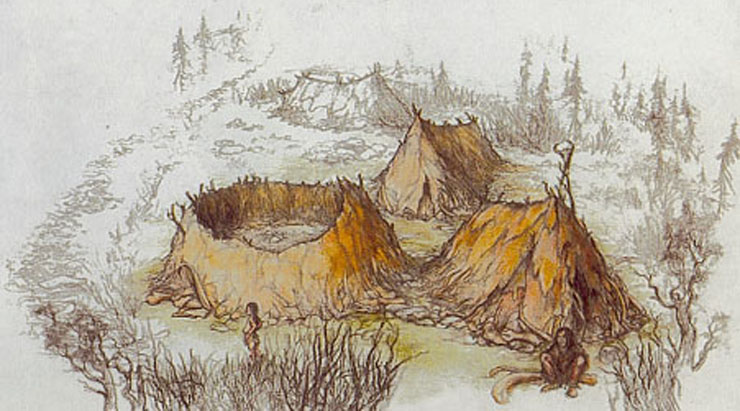 Kukla showed that just twenty thousand years ago when fully modern man, Homo sapiens sapiens, was painting scenes of the animal hunt on the ceilings of caves in southern France and Spain, the ice cap had extended southward from Scandinavia almost to the Alps just as Louis Agassiz had suspected. One clan of Ice Age hunters in Moravia had constructed dwellings near the conjunction of two rivers in the drainage basin of the Black Sea. Their homes, comprising the Upper Paleolithic settlement called Dolni Vestonice, had been built over pits chiseled from the frozen peat with hand axes. The roof of each tentlike structure was arched with poles, which were draped with animal skins stitched together with sinew. The hides were anchored to the ground by massive animal hipbones and by the skulls of reindeer, mammoths, and the occasional rhinoceros. Tusks provided fuel for hearths. The tool culture was exceptional for its fine leaf-shaped blades struck from a core of flint and for small bone carvings of animal heads, notably the wolf and the bear. (Noah's Flood)