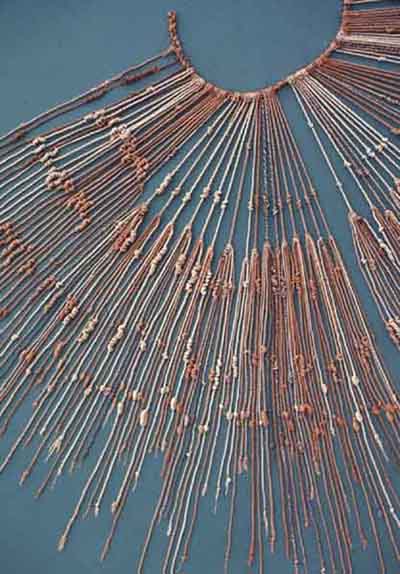 In fact, only the Inka of Peru managed to develop states and empires without a written language, but they had a fairly efficient substitute in the form of a vast bureaucracy and the quipu, a system of knotted strings in which the length of strings and placement of knots was used as a device to assist the memory of the record keeper. (Patterns in Prehistory)

A degree of longitude at the latitude of the caves of Cuenca, in Ecuador, is nearly 111,230 m. Divided by 320,000, this gives a foot of 0.3476 m and 1 cu. ft. equals 42,000 g of water. This weight could have been the base for several coins of our ancestors, but it is certainly the foundation of the gold tola in India, weighing 11.66 g and still in use today in the Persian Gulf... This mystery is even more intriguing when we see it in the light of recent discoveries that the Hindus navigated all the way around Africa, across the Atlantic Ocean, and up the Amazon River to bring home copper and tin from mines in Peru and Bolivia. (Our Cosmic Ancestors)

If we want to believe the Tiahuanaco calendar, this timetable was calculated on a date when the spring equinox in the southern hemisphere coincided with the Sun in perigee, a situation that last occurred 6,000 years ago and, before then, 27,000 years ago. Now, the Tiahuanaco calendar could not possibly have been calculated only 6,000 years ago. The ruins are obviously much older than that, and also, all of the legends from 4,000 BC tell us that our present Moon was already there, shining bright and silvery. So we must believe that the true age of the Tiahuanaco calendar is about 27,000 years, about the same as the cave paintings of Lascaux and Altamira. What is even more surprising is the fact that the numbers 264 and 288 were used by other ancient civilizations in South America, and that the phenomenon of the big moon was known throughout Central America. (Our Cosmic Ancestors)

Egyptian mummification techniques (which originated in predynastic Black Africa and were developed and refined in the dynastic period) are most in eviclence in Peru. There, in the desert sands, we find very specific and ample evidence of the Egyptian influence. In Colombia the inhabitants of Darien used to remove the viscera and fill the body cavity with resin, afterwards they smoked [that is, fumigated] the body and preserved it in their houses. ...an analysis of embalming mixtures in Peru "the antiseptic substances [used in embalming] are identical with those used in ancient Egypt . . . balsam, menthol, salt, tannin, alkaloids, saponins and undetermined resins." The ingredients are common enough. The formula is very complex and elusive. The full-blown Egyptian practice...of mummifying dogs has been found in Peru. What is even more intriguing is that these dogs mummified in Peru do not all look like the typical American spitz and husky types. Some look uncannily like the basenji, the species of Egyptian dog worshiped by the pharaohs. Other similarities in burial customs have been noted, such as twisted rope designs on sarcophagi, golden mumrny masks (such as the Chimu mask of Peru) and a small hole in the top slabs of death chambers for the release of the soul or the flight of the "bird of death." (They Came Before Columbus)