In an extensive review of the origin of iron-working in west Africa, McIntosh and McIntosh conclude that the evidence for an independent indigenous origin there is "exceedingly slim at present."(Patterns in Prehistory)

In 1938 Austrian archeologist Dr. Wilhelm Koenig found a 6- inch clay pot when rummaging through the basement of the Baghdad Museum. The pot had been discovered earlier in Sumerian ruins in southern Iraq and was thought to be around 2000 to 4000 years old. Upon further investigation Koenig found that it contained a cylinder of sheet-copper 5 inches by 1.5 inches. The edge of the copper was soldered with a 60-40 lead-tin alloy comparable to today's best solder. The bottom of the cylinder was capped with a crimped-in copper disk and sealed with bitumen or asphalt. Another insulating layer of asphalt sealed the top and also held in place an iron rod. The rod showed evidence of having been corroded with acid. When filled with vinegar - or other electrolytic solution - the jar produces approximately 1/2 to 2 volts. (Lost Star of Myth and Time)

Heyerdahl had come upon another equally striking piece of evidence. In September 1976, the mummy of Rameses II, the last of the great Egyptian pharaohs, who died in 1,213 BC, arrived in Paris, to form the centerpiece of an exhibition at the Museum of Mankind. Rameses had spent much of his life battling the Hittites, and the great hall of columns in the temple at Karnak is perhaps his finest memorial. When the mummy was examined, it was found to be deteriorating. Scientists were asked to repair the damage. One of these was Dr Michelle Lescot, of the Natural History Museum, who found herself examining a piece of mummy bandage under an electron microscope. To her astonishment, she recognised grains of tobacco, which seemed odd, for tobacco first came to Europe from South America in the time of Christopher Columbus. Dr Balabanova was not asked to study the mummy of anybody as distinguished as a great pharaoh; this was a mere priestess called Henut Taui, who died around 1,000 BC in Thebes. Her tomb was plundered by robbers in the nineteenth century, and the mummy was sold to Ludwig I, Bavaria's art-loving monarch, who gave it to the museum in Munich. Dr Balabanova tested the mummy with a method that depends on antibody reactions, and also through a machine that analyses the molecular weights of substances and shows them in the form of a graph. Both methods showed that the mummy not only contained nicotine, but also the drug cocaine. Cocaine is native to the Andes. Embarrassed by this publicity, the museums concerned were inclined to try and forget the whole thing. But Dr Balabanova refused. She went on testing mummies, and she regularly found traces of tobacco and cocaine. The sceptics continued to insist that it must be some other type of tobacco, native to Europe and long extinct, but that failed to explain the cocaine. Since Egyptologists have found no other signs of tobacco or cocaine in ancient Egypt, we may probably assume that there was no regular trade in these commodities. They must have been brought to Egypt at great expense for preserving the mummies of kings and queens and guaranteeing their immortality. (The Atlantis Blueprint)

The symbol for zero was believed to have been invented around 900 BC in India or Indochina. (Gods, Genes, and Consciousness)

Decimal numbers (used for calculations in the abacus) have been dated to 1350 BC in China. (Gods, Genes, and Consciousness)

Nothing on this planet compares to ancient Egyptian stonework. It must be studied in the way that Dr. Peter Lu, of Yale University, studied ancient China. He concluded that the ancient Chinese must have used compound machines three thousand years ago. His research is systematic, logical, and hard to refute. He made this ground breaking discovery while studying jade burial rings from Tomb 1 of the Chu minister at Henan Xichuan Xiasi that had been carefully inscribed with what appeared to be equally spaced spiral grooves. A simple camera and computer-aided design program were the tools with which Dr. Lu was able to draw his inference. Replication of the spirals was accomplished experimentally by a mechanical scribing tool guided by precise linear and rotational motions. Because of the radial features, it became clear that only a large circular saw would have been able to create the two radii on this block.  (The Lost Technologies of Ancient Egypt)

It has always been obvious from the surviving fragments of Democritus (fifth century BC) that rudimentary telescopes must have been available in antiquity. He expressed numerous views which indicate that he had been observing both the Moon and the stars through a telescope. He said, like the Hyperboreans (and perhaps he read this in Hecataeus and checked it out), that the Moon was like the Earth, that it had mountains which cast shadows, as well as valleys. How did he know that there were mountains which cast shadows on the Moon unless he had looked at it through a telescope? He also maintained that there were infinite worlds, differing in size, and that the Milky Way was not just a mass of light but was composed of innumerable small stars; and how could he make them out so surely, unless he had used a telescope to look more closely? (The Crystal Sun)

…the intricate Mayan calendar consisted of a Long Count divided into five cycles--the Five Suns or Five Ages of Man--with each cycle lasting about 5,000 years. According to Mayan reckoning, Cortes arrived in the time of the Fifth Sun, the last age of man. The priests would have told him that the world was 80 million years old, and that they had calculated that Earth revolved around the Sun in 365 days. The priest's knowledge of astronomy and command of mathematics would have surprised Cortes. Mayan astronomers had charted the movements of the Moon, Mercury, Mars, Jupiter, and Venus. Their base-20 system of math included the concept of zero, which they discovered 700 years prior to its discovery in Europe. (The Genesis Race) 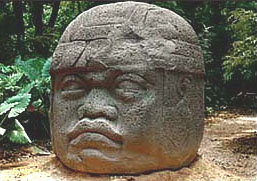 The Olmecs quarried basalt in the Tuxtla Mountains and floated the stones to their villages along the rivers that flowed to the Gulf of Mexico. The civilization mysteriously vanished around 400 BC, centuries before the rise of the better-known Mayans who greeted the Spanish conquistadors in the sixteenth century. Many years ago at the San Lorenzo site, Yale archaeologist Michael Coe found a thin, polished piece of magnetite that he thought might have served as a compass. If true, it would be a striking discovery, proving that the Olmecs had discovered the compass perhaps more than 1,000 years before the Chinese. (107)

Masterful "cire perdue" (lost-wax) technique gold work appeared spontaneously on the Pacific coast [Toltec] without any slow laborious precedents. The lost-wax technique is a very complicated process, and its appearance during the so-called "formative period" was accompanied by casting, gilding, soldering, alloying, and repousse’ work. Time frame: 1500-500 BC. Place: not far from the Valdivia-Jomon pottery sites. (Gods of the Cataclysm)

The Aztecs themselves looked to the Toltecs as wonderworkers, and the word toltecatl in Nahuatl means "artist." The Aztec description of the Toltecs represents them as the apotheosis of the technical, the skilled, the civilized: The Toltecs were a skillful people; all of their works were good, all were exact, all well made and admirable. Their houses were beautiful, with turquoise mosaics, the walls finished with plaster, clean and marvelous houses, which is to say, Toltec houses, beautifully made, beautiful in everything... Painters, sculptors, carvers of precious stones, feather artists, potters, spinners, weavers, skillful in all they made, they discovered the precious green stones, the turquoise; they knew the turquoise and its mines, they found its mines and they found the mountains hiding silver and gold, copper and tin, and the metal of the moon. The Toltecs were truly wise; they conversed with their own hearts... They played their drums and rattles; they were singers, they composed songs and sang among the people...(Gods of the Cataclysm)

The Maya calculated the solar year with marvellous accuracy as 365.2420 days by comparison with the modern calculation of 365.2422 days. This invention, along with their mathematical skills, seems to have appeared suddenly amid a primitive people at a date put tentatively between 613 BC and 580 BC. (The God-Kings & the Titans)

1000 BC Copper mining stops on Isle Royale, Lake Superior. (The God-Kings & the Titans)

Surveys in the mid-1980s in Equatorial Guinea and Gabon  revealed Neolithic Bantu villages already well-acquainted with iron smelting by the mid-first-millennium BC. (Patterns in Prehistory)