Chang suggests that Chinese civilization operated on a profoundly religious basis, with kings, nobles, and commoners arranged in a layered universe, under a pantheon of gods, with communication between the physical and spirit worlds channeled through priests. Hence the abiding concern with divining the will of the gods through oracles--the king himself was credited with oracular powers. And, as Chang notes, technology has a reduced importance in such a fundamentally religious and abstract cosmology, which may explain even some of the contemporary differences between East and West. (Patterns in Prehistory) 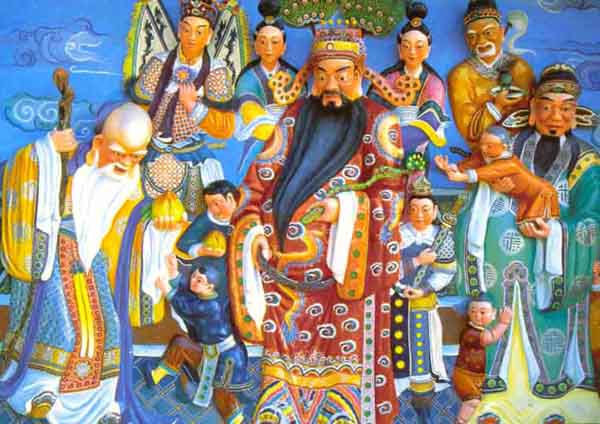 Like the mythology of these other cultures, Chinese mythology begins with a creator of the universe--in this instance, Pangu--followed by a succession of sage emperors and cultural heroes who came down to Earth to teach the ancient Chinese how to clothe themselves, grow plants, and pursue language and architecture. According to Chinese myth, human beings are made of yellow earth and mud, an account that finds echoes in chapter 2 of Genesis and in the myth of Sumer: "O mother! The creature you are going to name has come into being. Give it the image of gods. Mix the mud of the bottomless pit. Make his arms and legs. O mother! Announce the newborn's destiny: That is man!" Ancient Chinese legends also recount a great flood in which eight people--the same number as in Genesis-survive the deluge in a boat. (The Genesis Race)

In the Himalayas, Tibetans claim to have been the guardians of ancient knowledge and technologies which they credited to either Atlantis or Lemuria. (The Bon of Tibet speak of the Advanced Beings who started their culture as the Og-Min.) (Gods, Genes, and Consciousness)

Buddha, as would Jesus 500 years after him and Martin Luther many years later, rejected the established priesthood, discarding the Brahmanic caste, theology, and rituals. Pure Buddhism had no room for Advanced Beings as stand-ins between humans and the ultimate creative force of the universe. It had no room for gods, priests, prayers, rituals, or temples. Buddha, like Jesus, sought to liberate people from the go-betweens, setting individuals free from the formal dogma fostered by the god cults and religions. With no sense of dependence on supernatural gods, one did not need to appease them or pray for their help. (Gods, Genes, and Consciousness)

In China the archaic initiation rites and mysteries of the smiths are known to have formed an integral part of the traditions inherited by alchemy and Taoism. (Plato Prehistorian)

The entire 'arc' from Taiwan in the south, north-eastwards through all the islands of the Ryukyu archipelago, brushing the tip of Kyushu, leaping across the Korea Strait and thence into the Yellow Sea, Korea Bay and Bo Hai Bay encloses an area with enormous potential for underwater discoveries. To provide just one example (from the Ami tribe of central Taiwan), we hear how the four gods of the sea conspired with two gods of the land, Kabitt and Aka, to destroy mankind. The gods of the sea warned Kabitt and Aka: 'In five days when the round moon appears, the sea will make a booming sound: then escape to a mountain where there are stars.' Kabitt and Aka heeded the warning immediately and fled to the mountain and 'when they reached the summit, the sea suddenly began to make the sound and rose higher and higher'. All the lowland settlements were inundated but two children, Sura and Nakao, were not drowned: 'For when the flood overtook them, they embarked in a wooden mortar, which chanced to be lying in the yard of their house, and in that frail vessel they floated safely to the Ragasan mountain.' (Underworld)

Professor Heine-Geldern has suggested - with a magnificently organized assemblage of evidence - that this basal neolithic complex of the Far East (the place of origin of which has not been definitely fixed, though it would seem sensible to place it, provisionally at least, in the Afro-Asiatic Near East reached the Pacific by way of China and Japan, then spread southward across Formosa, the Philippines, Celebes, and the Moluccas to New Guinea and Melanesia, and even touched, finally, the primitive Australians and the Andamanese. Its form of boat was the plank-boat with no outriggers, and its characteristic ground ax of a roughly ovoid-cylindrical type. Many signs exist throughout the area of an early matriarchal social organization, with female shamans and perhaps even female rulers, while among the mythological and ritual motifs that were almost certainly associated with this Far Eastern basal neolithic complex are the immolated maiden and the fire goddess. "Society in the Far East during the New Stone Age," as Professor Carl W. Bishop has observed, "seems indeed to have borne a decidedly feminine cast." However, all consideration of the proto - and basal neolithic of the Far East is rendered difficult, first by the paucity of archaeological material from the provinces in question, and second by the vivid character of the bit that we have recently learned concerning the period immediately subsequent to the basal, when a powerful high neolithic center suddenly burst into view in the western provinces of China, largely influenced by a cultural impact from the Southeast European, Danube-Dniester zone. (Primitive Mythology)

The Chinese have always maintained that their civilization was founded by an amphibious being with a man's head and a fish tail, named Fuxi. (The Sirius Mystery)