Although we have no direct evidence of the hypothesized world-language's content or structure, some scholars believe that single language first divided 10 to 15 thousand years ago. Linguists arrive at such dates from their calculations of the time it would have taken for languages to evolve to their current level of diversity. Selection by the experts of the 10 to 15 thousand-year time span for the initial language division straddles the well-documented, worldwide Cataclysm of 11,500 years ago. That leaves us with the question of whether divergences in a basic language occurred before the Cataclysm or after. (Gods, Genes, and Consciousness) 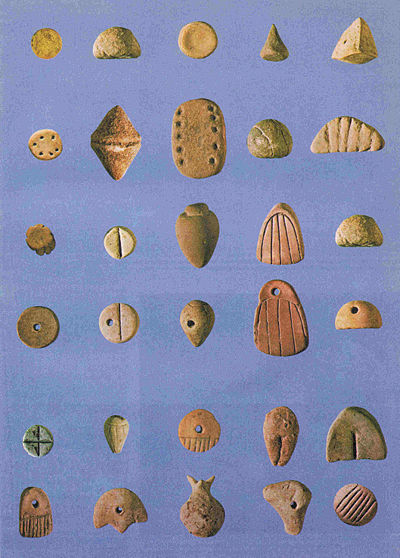 Archaeologist Denise Schmandt-Besserat was the first person to appreciate the significance of a strange category of clay artefacts. These were tiny spheres, discs, cones, cylinders, tetrahedrons and assorted geometric shapes. She noted that these 'tokens', as she named them, were widespread throughout Israel, Iran, Iraq, Turkey and Syria, and were some of the oldest clay objects to have been fired in order to make them more durable. She studied more than 10,000 tokens and was able to show that this Sumerian accounting system made use of a methodology that had been developing since about 8000 BC in the Near East. With the arrival of the Sumerians it had flowered into a written numerical system. The need to produce an ever-increasing number of token types eventually led to the development of a new system of handling data, which was to be the final step towards the emergence of the Sumerian script. Elamite developed into a type of logogram writing known as cuneiform. Because this earliest writing uses word symbols rather than an alphabet, it can be read only in vague terms. It does not reproduce speech but a series of word images. Because a single sign can be read in several different ways, according to the reader's subjective perceptions a line of text could have a number of diverse meanings depending on what images he or she perceived. (Uriel's Machine)

But as unlikely as the notion of an Upper Paleolithic script once seemed (the Sumerians are supposed to have invented writing in the third millennium BC), a recent study of the abstract signs accompanying the cave art suggests that these enigmatic marks were just that. A pair of American scholars has found counterparts to the Paleolithic signs in many of the earliest written languages of Europe and Asia. (Plato Prehistorian)

William Niven, a Scottish engineer and amateur archaeologist, had been excavating near a village called Amantia, north of Mexico City, when he found hundreds of tablets apparently written in the Mayan script. From their depth, Niven judged them to be more than 12,000 years old. Contemporary Mayan scholars were unable to decipher the script, but when Niven showed some of the tablets to Churchward, the ex-lancer claimed to be able to read it. During his time in India, he explained, he had formed a friendship with a Hindu priest who, when he learned that the young British officer was interested in archaeology, spent two years teaching him to read inscriptions that, he claimed, were written in Naacal, which was the original tongue of mankind and also the language of the lost continent of Mu. And now Niven had demonstrated the truth of another assertion: that the priesthood of Mu had sent emissaries to Central America to teach their secret knowledge and to prepare a place of refuge in the event of the destruction of their own civilization. This had finally come about…about 50,000 years ago.(The Atlantis Blueprint)