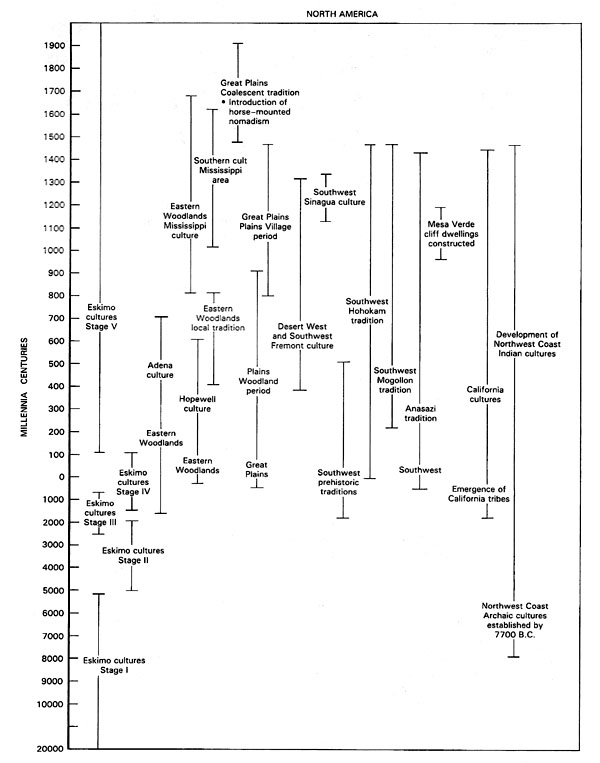 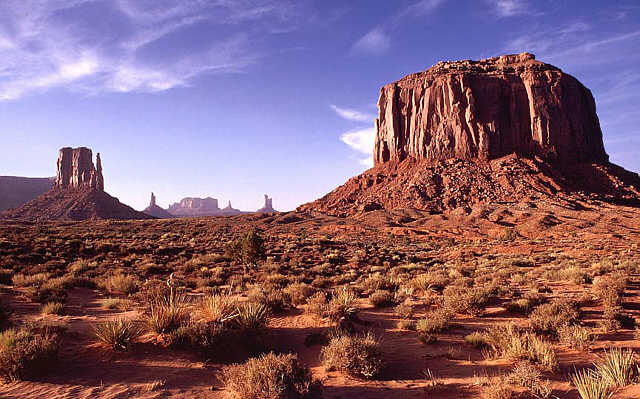 In some prehistoric periods the Southwest was wetter than it is today, but for most of the last ten thousand years the Southwest has usually been at least as hot and dry as it is today, and there were short periods of extreme drought. As a consequence, although people have lived here for at least ten thousand years, and although they eventually adopted maize-based agriculture, aggregated into large towns, and evolved some occupational and administrative specialization, they never produced class-structured, hierarchically organized, economically differentiated societies. (Patterns in Prehistory)

In some ways it is less than satisfying to conclude that the temperate latitudes of North America never produced states and empires because of the simple absence of draft animals, developed metallurgy, extensive warm arid alluvial plains, and a few other techno-environmental factors--but this conclusion seems inescapable. From the perspective of the present, the violent collision between Old and New World cultures also seems an inevitable outcome of the competition dynamic of evolutionary processes and the demographic, techno-environmental, and other conditions of both areas. (Patterns in Prehistory)

In areas outside the Advanced Being-influenced cultures of West Asia, such as early Greece and the Iroquois Nation of North America, other forms of government evolved where humans were free to work out their own processes of self-governance. (Gods, Genes, and Consciousness)

…in one Cherokee tribe, warriors could not undertake military action unless both a male and a female elder agreed. The concept of a paramount chief apparently did not develop in most African and American tribes until they had to designate one to meet a representative of the Indo-European king of an invading nation. (An exception is the Ganda people's kingship model, which is similar to the Anunnaki one.) (Gods, Genes, and Consciousness)

'One must study his own [Columbus's] memoirs, his original reports, to realize one thing he kept repeating: that he saw "white Indians", white women who wore their hair much in the manner of those in Castile, and other Indians, like the White Guanches of the Canary Islands who covered their heads with coloured silk turbans! The famous Genoese navigator himself had no illusions about his own discoveries. He not only recognised "Venetian beads" but also the external appearance of people and the goldsmith work which was typical of the Mediterranean countries. (The God-Kings & the Titans)