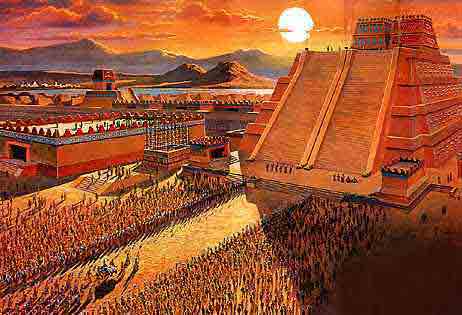 For tens of thousands of years before Cortez's arrival, the peoples of the Old and New Worlds had had so little contact that they were physically different, spoke entirely different languages, and had no idea that the others even existed. But here is the curious thing: when Cortez traveled the road from Veracruz to the Aztec capital near Mexico City, he passed through cities, towns, villages, markets, and irrigated fields; he saw slavery, poverty, potentates, farmers, soldiers, temples, massive pyramids, roads, boats, pottery, gold jewelry, and textiles; in short, he encountered a world whose almost every aspect he could understand in terms of his own experience as an urban Spaniard of the sixteenth century. (Patterns in Prehistory)

Spanish military superiority, coupled with the diseases they introduced, effectively ended the indigenous developments of Mesoamerican civilizations…New World peoples did not develop two technologies fundamental to the powerful imperialism of Old World societies-iron in the form of tools and weapons, and large domesticated animals capable of providing traction and transport (although New World peoples used metals in ornaments and had domesticated some beasts of burden, mainly the llama, in South America). (Patterns in Prehistory)

In each of these Mesoamerican areas, cultural evolution was much influenced by three general ecological conditions: (1) the millions of years of mountain-building volcanic activity that left Mesoamerica a still-trembling land of towering mountains and circumscribed valleys, and which in many areas compressed extremely different flora, fauna, and climates into close proximity, thereby rewarding inter-regional exchange, even though it made transport difficult; (2) the absence of any domesticable animal suitable for providing milk, transport, or draft power; and (3) the relative scarcity of large rivers with extensive alluvial plains in warm latitudes, unlike Egypt, Mesopotamia, the Indus Valley, North China, and Andean South America, for example, Mesoamerica has few large, navigable rivers in the semi-arid environments where primitive agriculture is highly productive. (Patterns in Prehistory)

Where many of the greatest Old World cities, such as Memphis in Egypt and Qwarka in Mesopotamia , counted their histories of dominance in millennia, most Mesoamerican centers ruled their particular worlds for only 400 to 600 years at most. (Patterns in Prehistory) 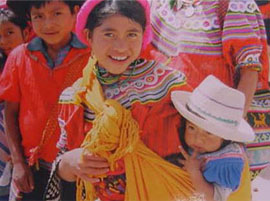 But despite these material indications of their brilliant achievements, the Maya peoples themselves seem to have lived much as their ancestors had. They still had not aggregated in cities, and although thousands of people must have cooperated to construct these great complexes, most still lived in small undifferentiated rural hamlets. Stephen Houston has used archaeological evidence and interpretations of Maya writing to estimate that most Maya polities were organized within areas of seventy kilometers diameter or less--with most of the settlements within a day's walk of the major center. (Patterns in Prehistory)

Schele and Friedel suggest that the Maya may have kept some of the bones of dead kings as relics and talismans; they also note that the bodies of kings and elites show that they were larger and more robust than the commoners of this community. (Patterns in Prehistory)

In Mayan villages in Guatemala, the position of leader was deemed to be a common obligation for which volunteers served a year and returned to normal life. (Gods, Genes, and Consciousness)

The Aztec priests appear to have been a good example of the second phase of priesthood. They contributed to maintenance of an Advanced Being cult in two ways: 1) serving as the channel for appeals to the gods and interpreting natural events as if they were caused by the gods, and 2) educating the people in a manner that perpetuated the religious control systems and kept citizens subservient to the ruling class. The priesthood had a hierarchy of different classes of priests to carry out the different duties. Nominally under the king, but pretending to represent the departed gods, they were largely free to manipulate the consciousness and behaviors of citizens as they saw fit. One group took care of the ceremonial and sacrificial duties, using their exclusive access to the altar to claim direct access to the gods. Next to them in power was the group keeping contact with the believers, overseeing penance, vigils, ablutions, fasting, and prayer. Individuals in these roles were required to maintain a high sense of asceticism and self-sacrifice. Others maintained the religious facilities, taking care of the physical needs of all priests. A special group was responsible for education and the formation of new priests as well as training of devotees. In addition to temple beliefs and practices, they taught astronomy, principles of government, history, and writing. (Gods, Genes, and Consciousness)

The priests of the third, or supernatural, phase had a much more difficult job. They had to convince potential followers of the merits of believing in and supporting an institution built around a social delusion. They could use stories, some possibly true and some apocryphal, of ways in which their supernatural but anthropomorphic god might have been involved in extraordinary past events. Because such claims had to be taken on faith, potential followers had to be conditioned to believe that they were lacking some status or right that only the religion could give them. Thus the first job of the priests was to convince people that they were unworthy--fallen from some higher state or unknowingly guilty of a great sin--and could expect eternal punishment if they did not believe in the religion's god. (Gods, Genes, and Consciousness)

Whether or not one thinks of the Olmec as the 'mother culture' of Meso-America, the fact is that many other civilisations, including the Maya, were ultimately dependent on the Olmec achievement. (The God-Kings & the Titans)

Another mystery is the similarity of customs on both sides of the Atlantic. Sumerians and Egyptians used the same art of mummification that was practiced by the Mayas and the Incas. (Our Cosmic Ancestors)

What tied the societies of Olman together was a shared set of beliefs and practices expressed in iconography and craft technology, the widespread adoption of which attests to the openness of communication among Olmec societies. Monumental art, although perpetuating particular elements of iconography and themes of rulership and cosmology, changed over the centuries in form and content, increasingly emphasizing narrative reliefs and historical events. (Olmec Archaeology and Early Mesoamerica)

The Olmecs were the first in the New World to form highly differentiated, hierarchical societies. From the raw material of ancient Native American shamanic beliefs and practices, their leaders crafted an ideology of rulership that continued to support Maya kings two thousand years later. To express that ideology, they created Mesoamerica's first monumental art, the scale, technical skill, and beauty of which was never equaled in their time. Furthermore, to acquire the exotic materials that embodied sacred power and enabled the mundane tasks of day-to-day life, they established an exchange network that eventually stretched 1,000 km from end to end, spreading the Olmec monument style as they did so.There was never even a single, unified, Olmec state that ruled all of Olman. Instead Olmec sociopolitical complexity emerged from competition and cooperation among many local leaders, and Olmec symbolic systems proved flexible enough to serve egalitarian villagers as well as rulers of powerful hierarchical polities. (Olmec Archaeology and Early Mesoamerica)

The stakes of war may have been control of resources, population, and power, but the Maya did not think of it in that way. To them it was a holy obligation, tied to the beings who created the world. Most of aIl, it was a battle between the spirit companions of the people who fought it. Victory not only secured wealth and power for the winners, it demonstrated to all that the gods were on their side. (Maya Cosmos)