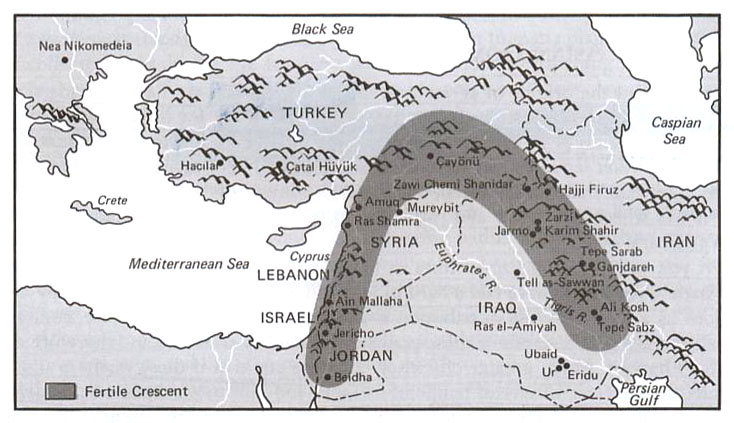 The best known and perhaps the world's first case of the origins of domestication and agriculture occurred in Southwest Asia, and involved peoples and environments ranging from Afghanistan to Greece over a time period of at least 14,000 years. From this region came domesticated sheep, goats, cattle, pigs wheat, barley, and many other crops on which much of the world today depends. At the end of the Pleistocene, the uplands of the "Fertile Crescent" supported large heards of wild sheep, goats, cattle, and pigs and, in many areas, dense stands of wild wheat and barley. In lower elevations and wetter regions, lakes and streams had abundant supplies of waterfowl and fish. (Patterns in Prehistory)

Shortly after 13,000 BC, grinding stones and sickle blades with a glossy sheen on their bits (the result of silica from cut stems adhering to a sickle's cutting edge) appear in late Palaeolithic tool kits...It's clear that the grinding stones were used in preparing plant food. At many riverside sites, at exactly this time, fish stopped being a significant food source and became a negligible one, as evidenced by the absence of fish remains: 'The decline in fishing as a source of food is related to the appearance of a new food resource represented by ground grain. The associated pollen strongly suggests that this grain was barley, and significantly, this large grass-pollen, tentatively identified as barley, makes a sudden appearance in the pollen profile...As apparently spectacular as the rise of protoagriculture in the late Palaeolithic Nile Valley was its precipitous decline. No one knows exactly why, but after about 10,500 BC the early sickle blades and grinding disappear to be replaced throughout Egypt by Epipalaeolithic hunting, fishing and gathering peoples who use stone tools. (Fingerprints of the Gods)

The Natufian culture flourished from 12,500 BC to 9500 BC. The Natufians were hunter-gatherers who subsisted on dozens of wild species, but they lived in permanent villages and devoted much of their time to the intensive gathering and processing of wild cereals. They built stone houses and granaries. They stored grain for times of need. They invented new tools such as stone scythes for harvesting wild wheat, and stone pestles and mortars to grind it.  (Sapiens)

...consider the settlements in the Levant (the region composing the modern area of Israel, the Palestinian territories, Jordan, Lebanon, and western Syria) that date back to circa 13,000 BCE to 10,000 BCE. Known to archaeologists as the Natufian culture, this culture apparently arose during the warming at the end of the last ice age, which brought a relatively wet climate to the Levant. There were abundant natural food supplies, from gazelles to hunt to wild barley, wheat, and rye to gather, which allowed the Natufians to settle down into permanent villages of up to several hundred people. (Forgotten Civilization)

Abu Hureyra was a quite extraordinary site that would reveal much about the transition from the age of the hunter-gatherer to the establishment of settled farming communities across the Near East. The first people to occupy the region arrived as the climate warmed during the Allerød interstadial, which heralded the end of the last ice age, around 13,000 BC. Its inhabitants—who belonged to the Natufian culture, which inhabited the Levant region, ca. 12,900–9500 BC—lived mainly by hunting, fishing, and cultivating lentils and wild cereals, such as einkorn, emmer, and rye. (Gobekli Tepe: Genesis of the Gods)

A few South American sites have been dated (controversially) to 20,000 to 15,000 years ago, but not until about 10,000 years ago is there substantial evidence of people in the mountains and coasts of Andean South America. John Rick has surveyed large areas of these uplands, and in caves and rock shelters he has found projectile points, scrapers, knife blades, and other traces of these early Peruvians: they ate a lot of deer, guanaco, and vicuna (an animal related to the llama, both of which are New World forms of camels), and in some cases were perhaps even able to live year round in small areas. In the beginning they also hunted giant ground sloths and a few other animals that became extinct about 10,000 years ago.

Some of these people were probably "transhumant," meaning that the moved up and down the mountains to exploit various resources as they came in season. Many people made these seasonal moves once alpacas and llamas were domesticated, because these animals require constant tending and frequent moves to new pasturages, and these animals made it possible for them to exploit the different environments at different times of year. The "thin" air, intense cold, blizzards, and thick fogs of the highlands make movement difficult, and over millennia of adapting to these conditions, natural selection has produced Andean peoples with extraordinary cardiovascular systems. Genetics and life-long exposure to the strains of life at high altitudes have produced people who can work hard in air extremely low in oxygen, while others unadapted to this environment can hardly function. (Patterns in Prehistory)