The earliest known dog in the archaeological record dates back 14,000 years. But the remains that date to that point in time are few and far between. More dogs have been found buried with humans who died about 12,000 years ago, which indicates that by the end the Ice Age the human-dog relationship was beginning to be established. It was not until 7000 BC to 6000 BC, however, that this relationship was clearly established in the archaeological record. The bones of dogs become common in campsites of the late Neolithic period. (The Genesis Race)

The Capsians of North Africa appear to have been a folk of moderate stature, averaging about five to five and a half feet tall, having long heads with retreating foreheads. They hunted with boomerangs, clubs, and bows, speared fish with delicate harpoons, collected berries and roots, and made a great thing of snails and shellfish. They wore beads, disk-shaped, of ostrich-egg shell, feathers, bracelets and girdles of perforated shells. The males ­ like many innocents of the woman-dominated equatorial zone ­ instead of concealing, decorated their genitals, while the women wore long stylish skirts. The Natufians of the Mount Carmel caves, on whose appearance, c. 6000 BC, we based our dating of the proto-neolithic, were a people of this Capsian culture style. (Primitive Mythology)

That the races too met and mixed is indicated by a uniquely high percentage of Alpine Brachycephalic physical types intermingled at Catal Huyuk with the two Proto-Mediterranean strains known earlier in the Near East, and again by the presence of a group of black men among the otherwise pink-skinned celebrants in the Hunting Shrine murals. (Plato Rehistorian)

7,700 years ago People with white skin and blue eyes first appeared in northern Europe. (Humans are Not from Earth)

On the other side of the world, in ancient Mexico, figurines of dogs have been found dating from about 8,000 years ago; fossilized dog remains have been discovered in several excavations; and, in a fascinating and intriguing combination, artifacts have been found in Mesoamerican burial sites that depict dogs on wheeled objects. These are either full-bodied dog figures mounted on four disk wheels attached to wooden axles or dogs whose bodies become sleds of sorts. The mystery of these objects stems from the belief that the ancient civilizations of the Americas did not have knowledge of the wheel. At one time it was thought that these dogs-on-wheels were children's toys, but scholars have since realized that their inclusion in burial sites marks a more serious significance. To ancient Mesoamericans the wheel symbolized the cycle of life, death, and rebirth. Like gold, neither it nor representations of it were used for utilitarian purposes. The dog also had symbolic significance. In Mexico it was a symbol of the night sun, making the dog a valuable companion to the deceased, who, according to Mexican cosmology, had to journey into the nine underworlds in the afterlife. (The Genesis Race) 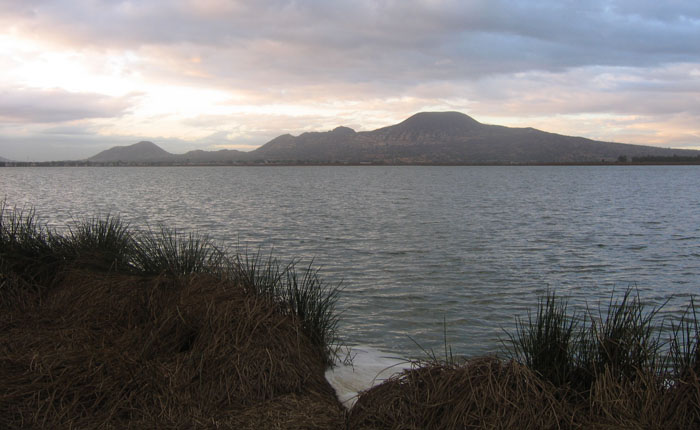 Tlapacoya is located at the foot of a small, extinct volcano that formed an island or peninsula at the northern edge of Lake Chalco. Nevertheless, archaeological excavations on the ancient lake shores at the site's Zohapilco locality have yielded an impressively long sequence of occupation stretching back to 6,000 BC. (Olmec Archaeology and Early Mesoamerica)