Environment around 1 million BC 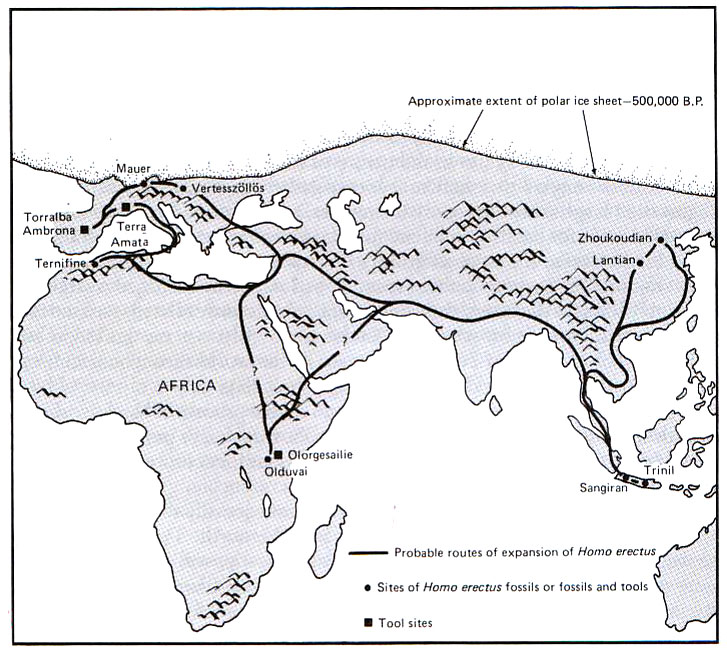 Homo erectus was the first hominid to invade temperate climates and may have been more widely distributed than is represented here. Land bridges, now submerged, fascilitates Homo erectus movements. (Patterns in Prehistory)

The "Total Replacement," "African Origins," or "Eve" model contends that modern humans evolved first and only in Africa and only a few hundred thousand years ago or less, and then migrated to the rest of the world, displacing all other hominid forms, and with little or no genetic interchange between them. If this is true, then, as interesting as those many European and Asian fossils and sites of hundreds of thousands of years ago are, the people who left these remains had almost nothing to do with us in terms of our physical or cultural heritage. This is a difficult premise for many anthropolgists to accept, because so much of what we know about human evolution has been based on sites such as Zhoukoudian, in China, Toralba-Ambrona, in Spain, etc.

Alternatively, the "Multiregional Evolution," "Continuity," or "Candelabra" models propose that: sometime between about 1 million and 2 million years ago a generic Homo ancestor or ours spread out across the warmer latitudes of Africa, the Middle East, Asia, and possibly the southernmost fringe of Europe; then, with the passage of the millennia, although these groups began to diverge somewhat as they adapted to local and different environments, across the whole range of Homo they were evolving toward Homo spaiens as a result of gene flow that connected all human groups to some extent and because they were all under similar evolutionary selective forces as genralized hunter-foragers; so they all converged at about 30,000 years ago as one species, Homo sapiens--but with the physical differencess that distinguish modern Europeans from, for example, modern Chinese. (Patterns in Prehistory)

Today the north pole is positive and the south pole is negative, but these were reversed in some periods, such as for most of the period between about 700,000 and 1.6 million years ago.

Within the Pleistocene alone - approximately the last two million years - there have been eight magnetic reversals, four normal and four reversed. They are named after either their discoverers, as in the Matuyama-Brunhes at 730,000 years ago, or after places, as in the Olduvai event beginning at 1,880,000 years ago and ending at 1,660,000 years ago. Paleomagnetics offers a well-documented way of assessing where one is in time by examining either the natural remnant magnetism of a rock or the orientation of magnetic particles within sediment, and then assessing "normal" or "reversed" polarity. If one has a reliable sequence of reversals, and one knows approximately where one stands in time, then it's feasible to get an "absolute" date for a layer sandwiched between a series of reversals. The longer the sequence, the better the result. (In the Footsteps of Eve)

The dramatic message from the deep-sea cores was that beyond any shadow of reasonable doubt the climate of the last million years has been dominated by periodic variations in the Earth's orbital parameters that have resulted in ice ages occurring roughly every 100 kyr. Since around 400 kya the pattern has been broadly consistent. Each ice age ended rapidly, then after an interglacial that lasted only around 10 kyr, the climate slipped back into glacial conditions, giving the temperature record a characteristic sawtooth appearance. (Climate Chnage in Prehistory)

It seems clear that by 300,000 years ago humans lived across much of the Old World, from England to northern China, from South Africa to Indonesia. Some of this area, particularly Africa, had been occupied by humans for more than a million years, and people had probably lived even on the extreme periphery for many hundreds of thousands of years. It seems clear that some form of early Homo left Africa and colonized Europe and Asia between 1.0 and 0.5 million years ago. (Patterns in Prehistory)

It does seem possible that the Eddas, like very similar myths and legends from around the world, contain echoes of a devastating catastrophe that engulfed the world during some distant epoch. Donnelly envisaged this sequence of events beginning around thirty thousand years ago, at the height of the last ice age, and culminating around eleven thousand to eight thousand years ago. ... his later dates correspond pretty well with the proposed timescale of cosmic catastrophes now believed to have taken place globally toward the end of the last ice age, triggered by a major impact event around 10,900 BC. Donnelly was convinced that a comet, or indeed a series of comets, was responsible for these cataclysms. A comet or asteroid impacting the earth would create unimaginable clouds of smoke, dust, and microparticles of various kinds that would be thrust into the upper atmosphere, creating what is known as a nuclear winter, a total blackout of available light. This debris, which would probably remain airborne for some considerable length of time, would be joined by a thick layer of toxic ash produced by the intense firestorms that would engulf entire regions of the planet in the days, weeks, and months after the initial event. (Gobekli Tepe: Genesis of the Gods)