Most of the Catal burials were secondary; skeletal remains had been laid on mats, placed in baskets, or more commonly, wrapped in fabric, skins, or fur. One characteristic type of shroud consisted of several layers of woven cloth bound by a netlike fabric of twined construction. No agreement has been reached on the raw material used in these extraordinarily fine textiles, and both fiber and wool may have been present. Felt was also found among the burials, as were traces of string skirts and fringed garments, and it is assumed that some of the Catal dead were clothed before burial. Toggles made from antler in male graves may have served to fasten cloaks; bone pins apparently clasped women's garments near the shoulder. (Plato Prehistorian) 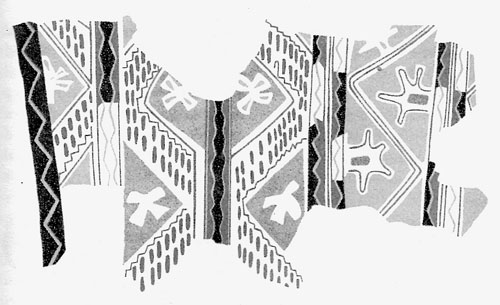 Border designs reminiscent of stitching on two of the geometric murals at Catal Huyuk, together with the skill shown in the weaving of the burial shrouds, led Mellaart to conclude that kilims, the colorful woven mats found today in Turkey, were already being made on the Konya plain as early as the seventh millennium BC, and that these Catal murals were inspired by kilim designs rather than the reverse. (Plato Prehistorian)

Like other early agriculturalists around the world, the early farming peoples of southern Asia solved the problem of clothing by domesticating a plant for fiber, specifically, cotton. Just as linen and wool were the staple textiles in Egypt and Mesopotamia, respectively cotton became the primary source of cloth for South Asia—as it did in Peru and elsewhere. Textiles are by no means the invention only of agriculturalists, however: various hunter-foragers around the world wove natural plant fibers into clothing. The growing populations of early farming cultures, however, and the need for seasonally adaptable and cheap clothing seems to have resulted in the domestication of a plant that could be grown intensively and easily converted to textiles. Cotton was probably domesticated in several areas of southern Asia between about 7000 and 5000 BC, but the evidence of precisely when and where this occurred is unclear. (Patterns in Prehistory)