A date has recently been obtained for the first cotton-growing in Mexico of 3400 BC. Cotton-growing - which is one of the more sophisticated forms of agriculture requiring an ability to clean the seed and to spin it - was conducted in the Old world first in northern India. The use of cotton for textiles was exclusively restricted at this period to India and was not extended to the Western world until two or three thousand years later. (The God-Kings and the Titans) 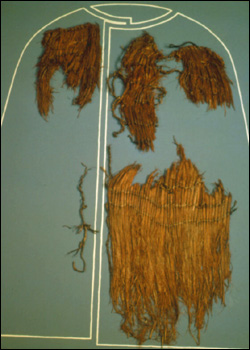 No one knows who he was or what he was doing high in the Tyrolean Alps that day some 5,300 years ago, the day he died. Researchers have identified in the clothing the skins of goat, calf, red deer and brown bear; roe deer, ibex and chamois may also be present. (78) 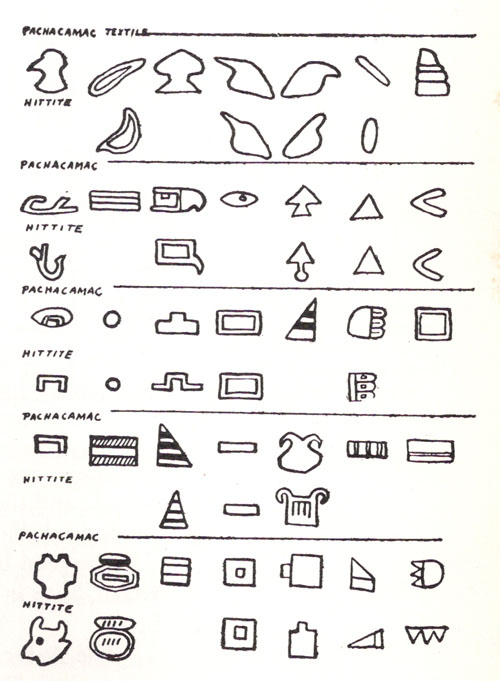 About ten miles from Lima, on a bare desert overlooking the Pacific, stand the remains of the city of Pachacamak. The city once had a population of several hundred thousand people. It was the holy city of Old Peru and it is quite probable that the supreme culture-bringer lies buried there. It is a Peruvian city of the greatest antiquity. Of the vast amounts of goods excavated from its graves and rubble is a tapestry, whose symbols are substantially the Hittite script.The Peruvians used the batik and itka methods of dyeing cloth. These dyeing techniques and the colour significance were used in the Mediterranean area of that period. (The God-Kings and the Titans)

Although native Americans in Peru were weaving cloth as early as 2500 BC, they were not using the loom. Dr. Junius Bird discovered cotton fabrics at Huaca Prieta in Peru carbon--dated 2500 BC., but 78 percent of the three thousand pieces of cotton cloth examined were twined and the rest netted--rwo of the simplest methods of producing fabrics without a loom. When a loom of the horizontal type appeared in Peru it was found to be "identical with a horizontal loom depicted in an Egyptian tomb. When the vertical loom appeared in Peru it was "identical with those found in a tomb at Thebes," the sacred capital of the black kings. Both the New World and Old World looms had the same eleven working parts. (They Came Before Columbus)

A date has recently been obtained for the first cotton-growing in Mexico of 3400 BC. Cotton-growing - which is one of the more sophisticated forms of agriculture requiring an ability to clean the seed and to spin it - was conducted in the Old world first in northern India. (The God-Kings and the Titans)