The first settlement at Mureybet was apparently burned around 8500 BC. When rebuilt, tanged, notched, and tanged-and-notched points were added to the Natufian-related assemblage. (Plato Prehistorian)

The distinctive artifact styles of these stone tools and other finds indicate that a large population of pre-agricultural peoples were widely distributed over much of China about 10,000 years ago. Most of these people were hunter-gatherers, with some groups specializing in fishing near the coasts and large lakes. (Patterns in Prehistory) 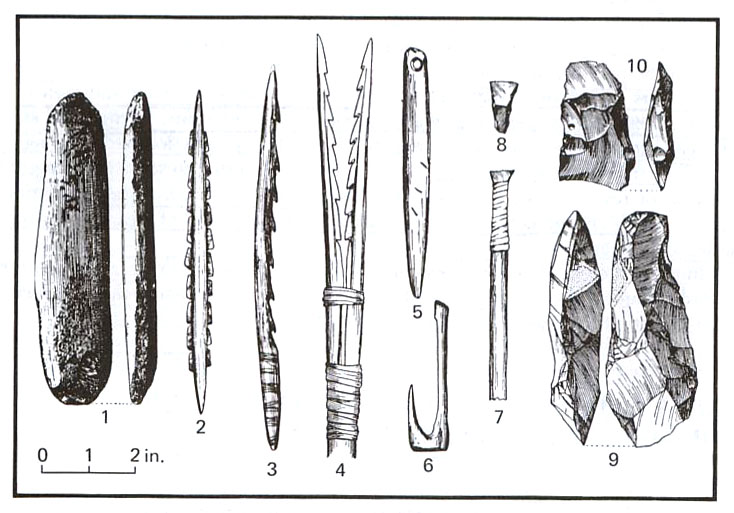 After about 10,000 years ago, people all over Europe began to exploit a much greater diversity of plants and animals than did their Pleistocene predecessors. This shift is reflected in Mesolithic fishing and hunting equipment: (1) limpet hammer; (2) bone fish-spear with microlith barbs, southern Sweden; (3) barbed point in red deer antler, c. 7500 BC, Star Carr, Yorkshire; (4) leister prongs of Eskimo fishermen (shows how the barbed point may have been used); (5) net-making needle (?) and (6) bone fish hook, Denmark; (7,8) microliths or transverse arrowheads, one found in peat hafted in wood with sinew binding, Denmark; (9) core-ax with transversely sharpened edge, Sussex; (10) flake-axe, Denmark.(27)

Archaeologists found nearby Asikli and closer to the volcano the remains of open-air shops in which workmen knapped blades, scrapers, and knives from the obsidian to be used not just for themselves but for trade with other communities and for export to the Levant. Present in the scrap piles were fragments of polished mirrors still shiny in defiance of the long passage of time. (131)

What researchers have derermined is a continuous history of mining activity that began in 8000 BCE and then abruptly ended around 1500 BCE, contemporaneous with the volcanic explosion on the Cretan island of Thera (now known as Santorini). (The Giants Who Ruled America)

Around 11,000 years ago Clovis points are abruptly replaced by a smaller, more finely made model now known as Folsom points (after a site near Folsom, New Mexico, where they were first identified). The Folsom points are often found associated with bones of an extinct wide-horned bison, never with the mammoths preferred by Clovis hunters. (The Third Chimpanzee)

Located in Lake Superior off the northern tip of the Keweenaw Peninsula in northern Michigan, Isle Royale, also known as Royal Island, is one of the most interesting ancient sites in America. Not only is the island lirerally made out of the highest-grade copper in the entire world, but its name also suggests its royal sratus in the minds of the ancient giants of the North American copper kingdom.  The entire region is scarred by ancient mine pits and trenches up to twenty feet deep. Carbon-dating testing of wood remains found in sockets of copper artifacts indicates that some are at least 5,700 years old, while other open digs around the area have been dated from eight to ten thousand years old. The most conservative estimates calculate that during a ten-thousand-year period, over five hundred thousand tons of copper were taken from the mines. (The Giants Who Ruled America)

Waukesha, Wisconsin: A power shovel has unearthed a chunk of pure copper, which two Carroll County scientists regard as probable evidence of the primitive "copper culture" 10,000 years ago.  (The Giants Who Ruled America)