The multiple ways in which Homo spaiens diverged physically and behaviorally from pre-sapiens forms of Homo in the period between about 300,000 years ago to 30,000 years ago are collectively referred to as the "Middle/Upper Paleolithic transition." This "transition" is visible in many radical changes, such as many technological innovations, including the bow and arrow, atlatl (throwing stick), bone and wood tools of diverse types, and techniques for extracting a relatively great amount of cutting edge from a given amount of stone. (Patterns in Prehistory)

The Neanderthals were adept stone toolmakers. Most of their tools belong to the Mousterian stone tool industry (named after the site of Le Moustier in southern France), which includes several distinctive stylistic and funtional elements. Francois Bordes uncovered 64 superimposed occupational levels in one cave, spanning the period from about 85,000 to 45,000 years ago. (Patterns in Prehistory)

Although the use of bone tools after 50,000 years ago may not have been absolutely innovative, the use of bone, as well as ivory, antler, and shell for the production of tools used in sewing - for example, awls, punches and needles - and for hunting equipment - for example, spear tips - is a virtual hallmark of the Upper Paleolithic. For example, along the Dnestr River in Russia. (The Past in Perspective) 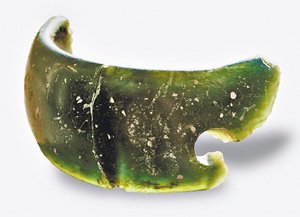 Among the more “unusual” and “unique” items excavated from the Paleolithic deposits within the entrance zone of the East Gallery (of Denisova Cave), specifically from Level 11.1 were two broken pieces of a dark green chloritolite bracelet.  The bracelet demonstrates a high level of technological skills. ,,,the bracelet “constitutes unique evidence of an unexpectedly early employment of two-sided fast stationary drilling during the Early Upper Paleolithic. Though the outward structure of Denisovan skulls might have been rather different from ours (predictable for a “sister species” to the Neanderthals), the sense of style, design, and personal adornment manifested in the bracelet seems completely modern, and archaeological reconstructions show it to have been a beautiful thing.  (America Before) 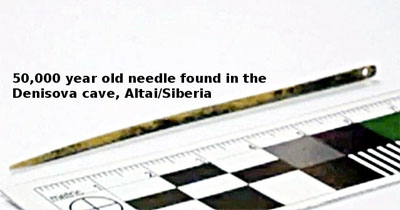 ...an exquisite bone needle 7.6 centimeters in length, with a near-microscopic eye less than 1 millimeter in diameter drilled out at the head... slightly curved like a modern surgical  needle... this lower part of Level 11 has been dated by accelerated mass spectrometry to around 50,000 years before the present (although it may be more ancient, given that 50,000 years is the limit of radiocarbon dating).  (America Before)

Conventional scholars were surprised in November 2014 by the discovery of a campsite along South Carolina’s Savannah River dated 25,000 years earlier than they believed possible... 50,000-year-old stone tools and other man-made material referred collectively to as Topper. According to its discoverer, ... “Topper is the oldest radio-carbon dated site in North America.” Goodyear found literally hundreds of tools made from locally obtained chert. The flint-like stone chisels and scrapers were used to skin hides, butcher meat, or carve antlers, wood, and ivory. (The Lost History of Ancient America)