The first major period of occupation at 'Ain Ghazal began at about 7,200 BC and it was pobably occupied  most or all of the time until about 5,000 BC. Covering approximately 30 acres, 'Ain Ghazal is about three times larger than Jericho, but it is unclear how much of the site was occupied at any one time. It probably had at one point at least several hundred inhabitants, who ate wheat, barley, lentils, sheep, and goats, and lived in mudbrick buildings of various sizes and shapes. (Patterns in Prehistory)

Most of the 158 structures uncovered at Catal Huyuk are not very different from their contemporaries elsewhere in Southwest Asia: each is built of shaped mud and composed of rectangular rooms with plastered walls and floors, and most houses are about twenty-five meters square, one story high, and abut one another, except where occasionally separated by an open courtyard. Inside most rooms are two raised platforms, probably for sleeping, and an occasional rectangular bench. Unlike any other community of this period and area, access to the rooms of Catal Huyuk was only by ladder through the roof--there are no front doors--and the close packing of structures is such that much of the movement among the houses must have been on the roofs. (Patterns in Prehistory)

The residential architecture of Tell as-Sawwan contrasts somewhat with that of other settlements of the period, consisting mainly of huts with stone foundations and the more common rectangular clay structures, although there is still little variability in building size or apparent construction cost. (Patterns in Prehistory) 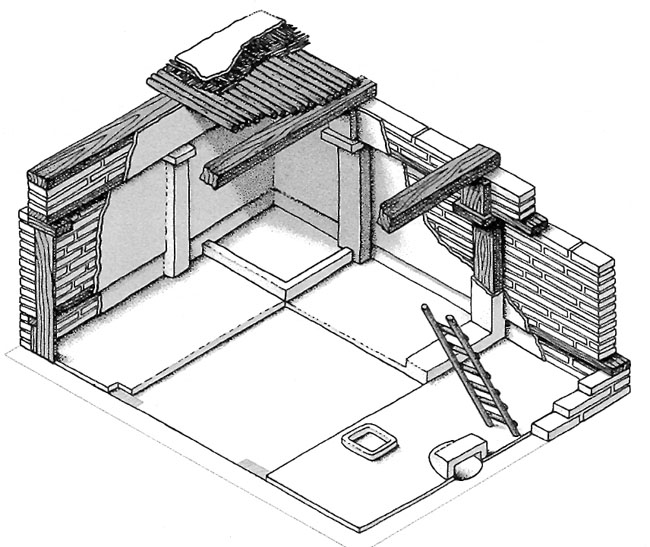 The extraordinary number of richly adorned shrines led Mellaart to the conclusion that Catal Huyuk was probably the spiritual center of the Konya plain. Up to fifteen shrines were present in a single building-level in the excavated area, each apparently the cult center for three or four of the surrounding houses. Both houses and shrines were usually some fifteen by twenty feet in size and were often adjoined by a smaller storeroom or shaft. Interior walls had been divided into sets of panels by timbers placed vertically and horizontally; these were plastered over and sometimes painted red. A curious corbeling technique brought the two upper panels forward toward the center of the room, each thus overhanging the panel below. A square platform up to eight inches high usually occupied the northeast corner of the room, with a longer platform on the east wall ending in a narrow bench about a foot in height. Burials were generally confined to the area beneath these two platforms, although they occasionally intruded into the space under the center floor in the crowded levels of VII and VI, when as many as 32 burials were known to a single shrine. Floors were plastered white, sometimes covered with woven straw mats, and in early levels often stained red. Along the south wall a ladder led up to the opening in the roof, the only entranceway. (Plato Prehistorian)

The excavators have designated this south side the kitchen area, as it was often provided with a raised hearth, a domed oven, and a built-in mortar or a raised grinding slab. Granaries, or rooms containing a number of grain bins, appear to have been shared by several shrines. No explanation has been offered for the presence of so much "kitchen equipment" and grain in what were patently religious structures, and one wonders if the preparation of a sacred bread or porridge, so common in the cults of later antiquity, might already have been known at this site. (Plato Prehistorian) 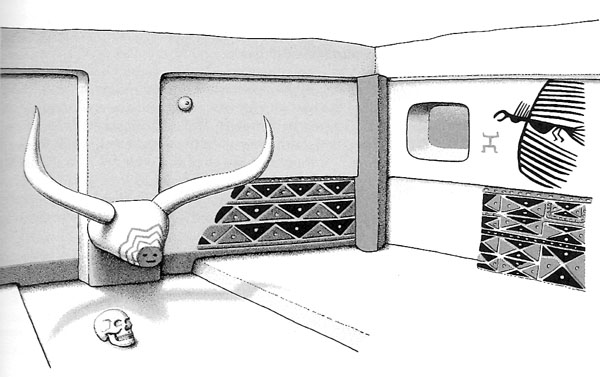 Catal Shrine VII.21 reconstruction of west and part of north wall. Several human skulls were found on the platforms of this vulture-bull shrine. (Plato Prehistorian) 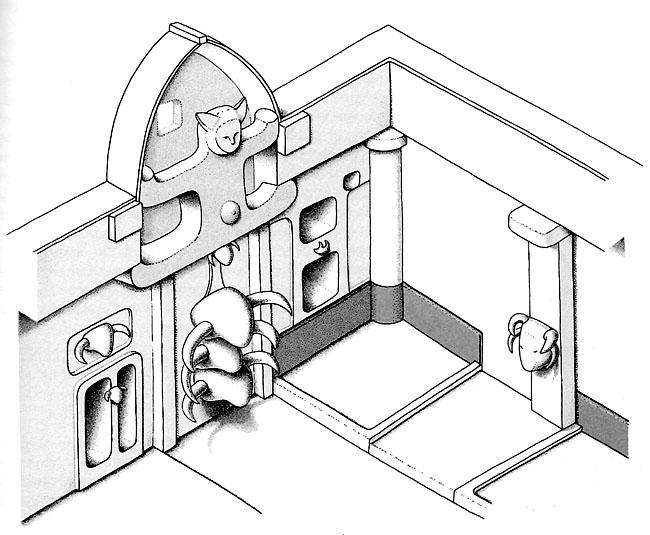 Reconstruction of an early phase of Shrine VI.10 at Catal Huyuk, west and north walls. Height of panel, 12 feet. Mellaart has compared the Twin Goddess relief to the even larger construction that dominated Shrine VI.10, and it is possible that Persephone's prototype figured in this composition as well. His tentative reconstruction shows the stylized goddess-form apparently giving birth to another horned child; this time a small ram's head had been positioned just below her body. Within the doorlike frame supporting the goddess were set three superimposed bulls' heads. On either side cavernous niches had been cut into the walls. These and the several limestone concretions that seem to have been brought into this shrine from caves suggested to Mellaart an orientation toward the underworld: "a chthonic cult of the Great Goddess as mistress of the underworld." (Plato Prehistorian)

The Samarra period - named after a widespread pottery style created by what Roux describes as 'a hitherto unsuspected culture which flourished in the Middle Tigris valley during the second half of the sixth millennium BC’ – i.e. approximately 7500 years ago.74 The geneticist Luca Cavalli-Sforza suggests that this date should be pushed back to 'about 8000 years ago'. There is evidence that this culture used irrigation techniques, grew large surpluses of wheat, barley and linseed, and built spacious houses out of mud brick – later the favored method of construction in the cities and temples of historical Sumer. (Underworld) 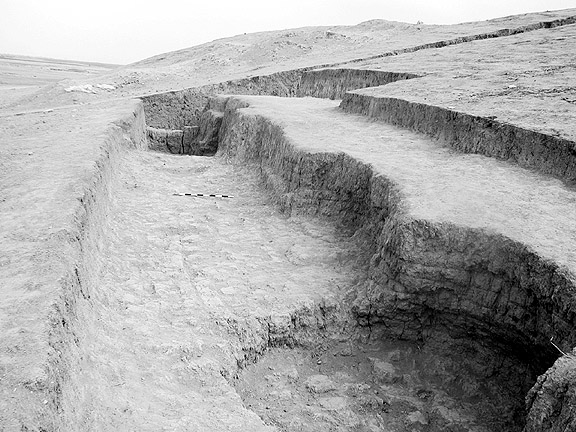 The Ubaids built large houses for their extended families. At the level of earliest occupation three homes have been excavated at Tell el Oueili, just across the Euphrates from al-Ubaid. One of the foundation dwellings was over forty feet in length with an external staircase flanking a hall whose roof was supported by rows of posts or columns. Wood, which had to have been imported from far to the north or east, was from the beginning an important building material. The obsidian for their serrated knives came from Anatolia. Their terra-cotta figurines reveal tattooed bodies - the women strikingly slim with bands around the neck and waist. Within the uncertainties of the carbon 14 dating methods the settlement of al-Ubaid appears to date to the era of the arrival of newcomers in Palestine and to the Black Sea flood. (Noah's Flood)

[in Catalhoyuk in central Turkey] The design of the buildings is another odd feature of the settlement. There were no streets. All the structures were connected, like a layer from a huge polygonal beehive. Entry to each dwelling was through an aperture in the flat roof, with access across the roofs of the adjacent buildings. (Climate Change in Prehistory) 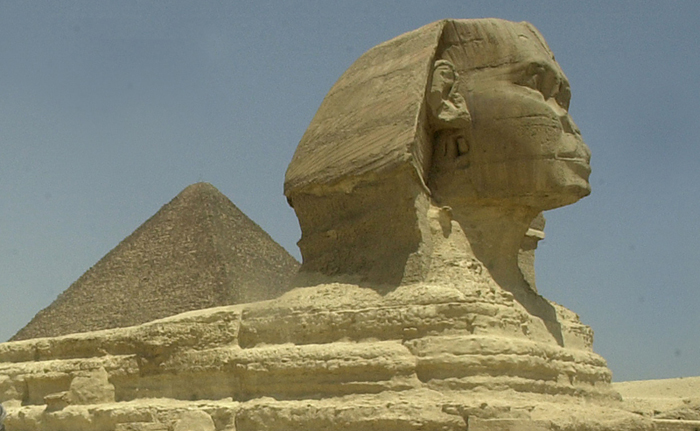 Schoch's case, in brief - which has the full support of palaeo-climatologists - rests on the fact that heavy rainfall of the kind required to cause the characteristic erosion patterns on the Sphinx had stopped falling on Egypt thousands of years before the epoch of 2500 BC in which Egyptologists say that the Sphinx was built. The geological evidence therefore suggests that a very conservative estimate of the true construction date of the Sphinx would be somewhere between '7000 to 5000 BC minimum'. ...as the years have gone by, the Boston geologist has withstood the rigours of scientific peer review, several times successfully defending his contention that the distinctive weathering visible on the Sphinx, and on the walls its enclosure - a combination of deep vertical fissures and rolling, undulating, horizontal coves - is 'a classic, textbook example of what happens to a limestone structure when you have rain beating down on it for thousands of years ... When set in the context of our knowledge of ancient climates at Giza, he adds, this represents abundant evidence 'that the Great Sphinx predates its traditional attribution of circa 2500 BC. . . I'm just following the science where it leads me, and it leads me to conclude that the Sphinx was built much earlier than previously thought.' (Keeper of Genesis)

Prehistoric settlements, such as Nabta, reveal repeated occupation over several thousand years, especially during the summer rains, when water was plentiful for large groups of people and their animals. From charcoal and ostrich eggshells, radiocarbon dates tell of larger communities existing between 6100 and 6000 BC. One excavated village contained more than eighteen houses, arranged in straight lines, with deep, walk-in wells-a task obviously requiring significant labor. One well Wendorf excavated was twelve feet wide and nine feet deep, large enough to enable life in the desert throughout the year. He believes the construction of these wells is possibly the first sign of an emerging social structure that later designed and built the Nabta megalithic complex around 5000 BC. (Before the Pharaohs)

What Brophy discovered was that the calendar circle at Nabta Playa was more than a calendar. It was also a star-viewing diagram. Three of the six stones in the center of the circle diagramed the stars of Orion's belt as it appeared on the meridian at the summer solstice between 6400 and 4900 BC. In other words, if a person stood at the north end of the meridian sight line and looked down on the stone diagram, he or she would see a representation of Orion's belt as it appeared in the sky just before sunrise. The other three stones chart Orion's head and shoulders as they appeared on the summer solstice meridian, at sunset, during the years around 16,500 BC--symmetrically opposite Orion's belt stars in 5000 BC. According to Brophy, both dates are the maximum and minimum of Orion's tilt angle in the sky. In other words, the stone diagram depicts the time, location, and tilting behavior of the constellation of Orion through its celestial cycle. More important, it illustrates how to visually understand the pattern of stones. If an astute, ancient sky-watcher from some foreign culture stumbled upon the Nabta calendar circle, even if he had no concept of the constellation of Orion, he would very likely have figured out the meaning of the diagram, as long as he was there during the diagram's window of functionality from 6400 BC to 4900 BC. Astonishing as it may be, the bedrock sculpture underneath "Complex Structure A" at Nabta Playa appears to be an accurate depiction of our Milky Way Galaxy, as it was oriented astronomically at a specific time: vernal equinox heliacal rising of the Galactic Center in 17,700 BC. According to Brophy, in a method developed by Schaefer in 1986, the probability that seven stars align with megaliths is less than 2 in 1,000,000. Strikingly, that is more than a thousand times as certain as the usual three standard deviations requirement for accepting a scientific hypothesis as valid. Even by conservative estimates, these are by far the most certain ancient megalithic astronomical alignments known in the world. (Before the Pharaohs)

Makers of lovely wattle and daub houses houses and fine incised pottery, the Vinca appear abruptly on the plains of Bulgaria within a century and a half after the flood, settling also on the river terraces of the southern Hungarian plain and in mountain valleys as far south as the Vardar River in Macedonia. They constructed well-planned permanent villages on leveled ground with parallel rows of houses separated by streets. Unlike their predecessors, they built villages one on top of the other, staying on one site for successive generations. They plastered their floors with whiteclay. But instead of constructing their walls of mud-brick, they built them from split timber planks or hewn posts interwoven with twigs and covered with a thick layer of mud plaster. Curiously, all the Vinca settlements are located well back from the sea. Only in the European interior, on the Hungarian plain, within the protective ring of the surrounding mountains, did they live on landscapes below an elevation of three hundred feet. Could it be that they had experienced the catastrophe of the flood and feared the sea? (Noah's Flood)

6500 BC Settlement at Inverness (Uriel's Machine)

The Koster site, in the Illinois River Valley, was first occupied at about 7,500 BC, and people lived at this site many times, at least until about 2,500 BC. These people slowly improved their technologies, adding new varieties of stone tools, more permanent forms of housing made of clay, poles, and thatch, rare implements of copper for which they traded with neighboring groups, and various other tools. (Patterns in Prehistory)

CONLY Eight radiocarbon dates securely locate the site between 7,500 and 8,000 years ago.  (America Before)