...the city of Tiahuanaco was once a port, complete with extensive docks, positioned right on the the shore of Lake Titicaca. The problem is that Tiahuanaco's ruins are now marooned about twelve miles south of the lake and more than 100 feet higher than the present shoreline. In the period since the city was built, it therefore follows that one of two things must have happened: either the level of lake has fallen greatly or the land on which Tiahuanaco stands has risen comparably. Based on the mathematical astronomical calculations of Professor Arthur Posnansky of the University of La Paz, and of Professor Rolf Muller (who also challenged the official dating of Machu Picchu), it pushes the main phase of construction at Tiahuanaco back to 15,000 BC. This chronology also indicates that the city later suffered immense destruction in a phenomenal natural catastrophe around the eleventh millennium BC, and thereafter rapidly became separated from the lakeshore. (Fingerprints of the Gods) 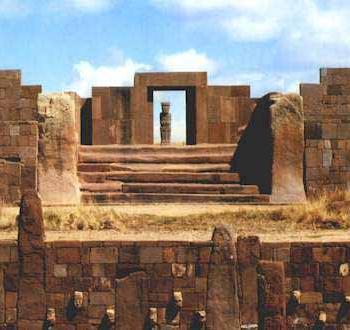 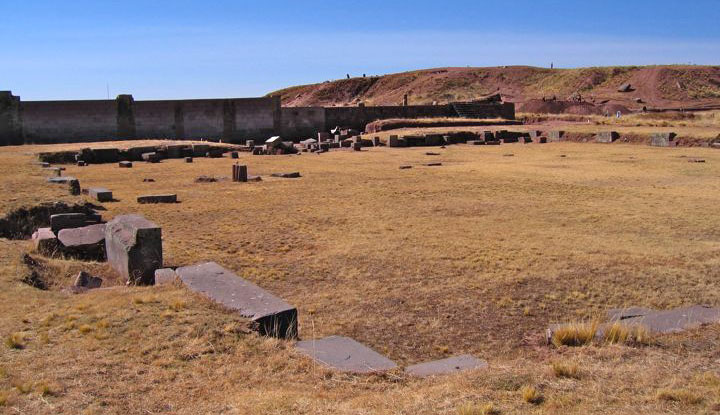 The Gateway of the Sun, that surpassing work of art, had never been completed. Indeed, according to the unorthodox estimates of Professor Posnansky, Tiahuanaco had been in active use as a port as early as 15,000 BC, the date he proposed for the construction of the Kalasasaya, and had continued to serve as such for approximately another five thousand years, during which great expanse of time its position in relation to the shore of Lake Titicaca hardly changed. Here Posnansky's excavations revealed two artificially dredged docks on either side of: 'a true and magnificent pier or wharf...where hundreds of ships could at the same time take on and unload their heavy burdens'. One of the construction blocks from which the pier had been fashioned still lay on site and weighed an estimated 440 tons. Numerous others weighed between 100 and 150 tons. Furthermore, many of the biggest monoliths had clearly been joined to each other by I-shaped metal clamps. (Fingerprints of the Gods)

Garcilasco de la Vega, who visited in the mid-sixteenth century, described it this way: "We must now say something about the large and almost incredible buildings of Tiahuanaco. There is an artificial hill, of great height, built on stone foundations so that the earth will not slide. There are gigantic figures carved in stone ... these are much worn which shows great antiquity. There are walls, the stones of which are so enormous it is difficult to imagine what human force could have put them into place. And there are the remains of strange buildings, the most remarkable being stone portals, hewn out of solid rock; these stand on bases up to 30 feet long, 15 feet wide and 6 feet thick. How, and with the use of what tools or implements, massive works of such size could be achieved are questions which we are unable to answer." One of the stone portals de la Vega describes stands at the north- west corner of a vast enclosure known as the Place of Upright Stones. This portal, while an amazing work of art, is also a complex and accurate calendar in stone. The whole complex has been found to be an intricate astronomical observatory, designed perhaps to calculate alignments of solstices and equinoxes with the galactic core and edge. Whatever it was designed to do, its astronomical nature allows us to date its construction with precision.Posnansky found that by establishing the solar alignments of key structures that now looked out of true, he could determine the angle of the ecliptic tilt at the time when the structure was built. He found a tilt of 23°8'48". Comparing this angle to the graph developed in 1911 by the International Conference of Ephemerids, we find a corresponding date of around 15,000 B.C.E. Naturally, most orthodox archaeologists found this hard to take. (The Mysteries of the Great Cross of Hendaye) 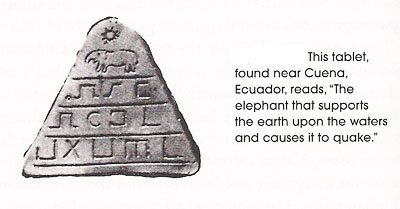 Plato tells us that Atlantis contained a great number of elephants, a fact that argues against Crete or Thera. Present-day South America has no elephants, of course, but during the Ice Age it apparently did. Remains have been found of a species called Cuuieronius, which was an elephant-like proboscidean complete with trunk and tusks. We find these animals carved on the great stone portal of the Gateway of the Sun, suggesting they were common in the Tiahuanaco area. These "elephants," however, became extinct around 10,000 B.C.E. (The Mysteries of the Great Cross of Hendaye)

When we stand back and look at this vast panorama of connections and correspondences, the conclusions, strange as they may seem, are obvious. A high civilization existed in the Andes around 15,000 B.C.E. It was perhaps even far beyond our current level. A catastrophe destroyed that culture, except for isolated pockets of survivors. It is possible that some of these "survivors" were actually immortal beings who had attained a "light body" before the wave of destruction arrived. Whatever their exact nature, these beings worked for thousands of years to restart civilization from the ground up, perhaps literally. (The Mysteries of the Great Cross of Hendaye)