In the Near East many bands of hunter-gatherers had adopted a more sedentary way of life, constructing permanent villages, hunting and fishing locally, and gathering fruits, nuts, and wild wheat and barley, which they later learned to cultivate. With the coming of the Younger Dryas, however, and the sudden change to a cooler and arid climate, these resources disappeared. Jericho was deserted, as were many other villages. The plains of Ukraine and southern Russia reverted to steppe desert. Tribes crowded near oases where game and water were plentiful, such as at the rim of the Black Sea lake. (Noah's Flood)

The evidence indicates that hunter-gatherers at Abu Hureyra first started cultivating crops in response to a steep decline in wild plants that had served as staple foods for at least the preceding four centuries. The decline in these wild staples is attributable to a sudden onset of a drier, colder, more variable climate. Work by Gordon Hillman, of University College London, and his colleagues found that the wild seed varieties gathered as food gradually vanished, before the cultivated varieties appeared. Those wild seeds most dependent on water were the first to die out, then one by one by the hardier ones followed. So the hunter-gatherers turned to cultivating some of the foods they had previously collected from the wild. In an unstable environment, the first farmers started simply by transferring wild plants to more suitable habitats and cultivating them there. (Climate Change in Prehistory)

Another piece in the jigsaw of agricultural origins is the lifestyle identified as the 'Natufian culture' that thrived in the Levant between 14.5 to 12kya. During the first half of this period temperatures rose and precipitation increased and in the southern Levant reached a peak around 13.5 kya. This led to increased vegetation and greater yields of wild fruit, seeds and game animals, which altered lifestyles. In favoured areas sedentism became the preferred settlement pattern. With sedentism came population growth. (Climate Change in Prehistory)

Fossil rice phytoliths have been identified from late glacial to Holocene sediments in the East China Sea that were probably transported by the Yangtze River from its middle or lower reaches. The phytoliths appeared first in the sequence at about 13.9 kya and disappeared during the period of 13-10 kya, which includes the Younger Dryas. (Climate Change in Prehistory)

By about 14,000 years ago the people of western Europe had developed fish traps to harvest the countless slamon that migrated up the rivers there each year. This relatively late exploitation of fish in Europe has a parallel in prehistoric southeastern North America, where native American lived for thousands of years subsisting primarily on deer, mussels, and a variety of plant foods, alomost totally ignoring the myriad fish in nearby streams. (Patterns in Prehistory)

In the Near East many bands of hunter-gatherers had adopted a more sedentary way of life, constructing permanent villages, hunting and fishing locally, and gathering fruits, nuts, and wild wheat and barley, which they later learned to cultivate. With the coming of the Younger Dryas, however, and the sudden change to a cooler and arid climate, these resources disappeared. Jericho was deserted, as were many other villages. The plains of Ukraine and southern Russia reverted to steppe desert. Tribes crowded near oases where game and water were plentiful, such as at the rim of the Black Sea lake. (Noah's Flood) 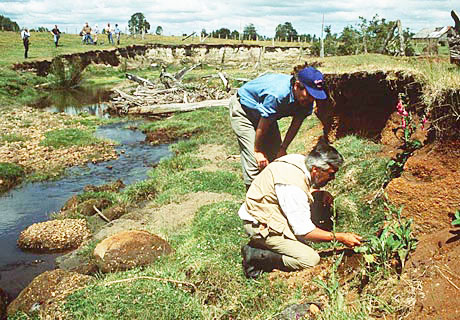 Monte Verde, on the banks of Chinchihuapi Creek, is in the hills near the town of Puerto Mont, 500 miles south of Santiago. As Dr. Dillehay reconstructed the prehistoric scene in his mind, a group of 20 to 30 people occupied Monte Verde for a year or so. They gathered berries in the spring, chestnuts in the fall and also ate potatoes, mushrooms and marsh grasses. They hunted small game and also ancestors of the llama and sometimes went down to the Pacific, 30 miles away, for shellfish. Some seeds and nuts were shifted out of the soil. A chunk of meat had managed to survive in the bog, remains of the hunters' last kill; DNA analysis indicates the meat was from a mastodon. The site also yielded several human coprolites, ancient fecal material. (98)