From the Epic of Gilgamesh

The futile search by mortal Man for the Tree of Life is the subject of one of the longest, most powerful epic texts bequeathed to human culture by the Sumerian civilization. Named by modern scholars "The Epic of Gilgamesh," the moving tale concerns the ruler of Uruk who was born to a mortal father and a divine mother. As a result, Gilgamesh was considered to be "two-thirds of him god, one-third of him human," a circumstance that prompted him to seek escape from the death that was the fate of mortals.

Tradition had informed him that one of his forefathers, Utnapishtim - the hero of the Deluge - had escaped death, having been taken to the Heavenly Abode together with his spouse. Gilgamesh therefore decided to reach that place and obtain from his ancestor the secret of eternal life.

What prompted him to go was what he took to be an invitation from Anu.

In the introduction to the epic, the ancient reporter called Gilgamesh "the wise one, he who has experienced everything":

Secret things he has seen,
what is hidden to Man he knows;
He even brought tidings
of a time before the Deluge.
He also took the distant journey,
wearisome and under difficulties;
He returned, and engraved all his toil
upon a stone pillar.

The ruler Gilgamesh
toward the Land of Tilmun set his mind.
He says to his companion Enkidu:
"O Enkidu...
I would enter the Land, set up my shem.
In the places where the shem's were raised up
I would raise my shem."

Let me enter the Land,
Let me set up my shem.
In the places where the shem's are raised up,
let me raise my shem...
Bring me to the landing place at...
Establish over me thy 'protection!

In my dream, my friend,
the high ground toppled.
It laid me low, trapped my feet...
The glare was overpowering!
A man appeared;
the fairest in the land was he.
His grace...
From under the toppled ground he pulled me out.
He gave me water to drink; my heart quieted.

In the middle of the watch his sleep was ended.
He started up, saying to his friend:
"My friend, didst thou call me?
Why am I awake?
Didst thou not touch me?
Why am I startled?
Did not some god go by?
Why is my flesh numb?"

The vision that I saw was wholly awesome!
The heavens shrieked, the earth boomed;
Daylight failed, darkness came.
Lightning flashed, a flarme shot up.
The clouds swelled, it rained death!
Then the glow vanished; the fire went out.
And all that had fallen had turned to ashes.

He was now near his first objective - the "place where the shem's are raised up." But the entrance to the site, apparently cut into the mountain, was guarded by fierce guards:

Their terror is awesome, their glance is death.
Their shimmering spotlight sweeps the mountains.
They watch over Shamash,
As he ascends and descends.

When Gilgamesh explained his partly divine origins, the purpose of his trip ("About death and life I wish to ask Utnapishtim") and the fact that he was on his way with the consent of Utu/Shamash, the guards allowed him to go ahead.

Proceeding "along the route of Shamash," Gilgamesh found himself in utter darkness; "seeing nothing ahead or behind," he cried out in fright. Traveling for many beru (a unit of time, distance, or the arc of the heavens), he was still engulfed by darkness. Finally, "it had grown bright when twelve beru he attained."

The damaged and blurred text then has Gilgamesh arriving at a magnificent garden where the fruits and trees were carved of semi-precious stones. It was there that Utnapishtim resided. Posing his problem to his ancestor, Gilgamesh encountered a disappointing answer: Man, Utnapishtim said, cannot escape his mortal fate. However, he offered Gilgamesh a way to postpone death, revealing to him the location of the Plant of Youth - "Man becomes young in old age," it was called. Triumphant, Gilgamesh obtained the plant. But, as fate would have it, he foolishly lost it on his way back, and returned to Uruk empty­handed. 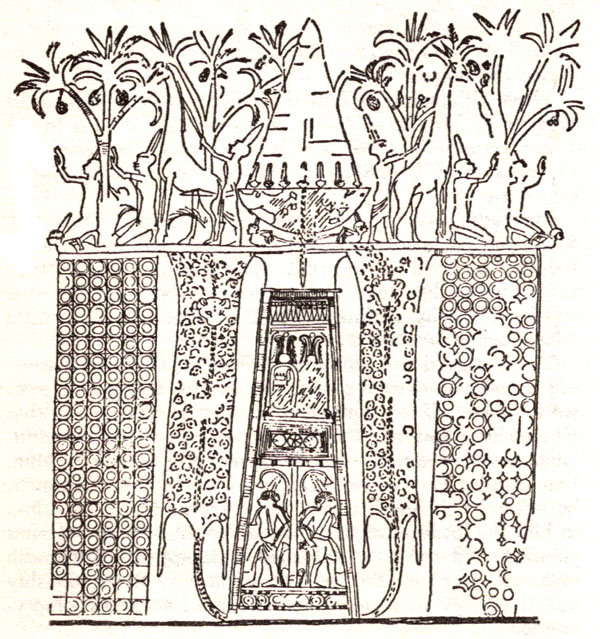 No pictoria depiction of what Gilgamesh saw has so far come to light. But a drawing (above) found in the tomb of an Egyptian governor of a far land shows a rockethead above­ground in a place where date trees grow. The shaft of the rocket is clearly stored underground, in a man-made silo constructed of tubular segments and decorated with leopard skins.

Very much in the manner of modern draftsmen, the ancient artists showed a cross-section of the underground silo. We can see that the rocket contained a number of compartments. The lower one shows two men surrounded by curving tubes. Above them there are three circular panels. Comparing the size of the rockethead - the ben-ben - to the size of the two men inside the rocket, and the people above the ground, it is evident that the rockethead - equivalent to the Sumerian mu, the "celestial chamber" - could easily hold one or two operators or passengers.

TIL.MUN was the name of the land to which Gilgamesh set his course. The name literally meant "land of the missiles." It was the land where the shem's were raised, a land under the authority of Utu/Shamash, a place where one could see this god "rise up to the vault of heavens."

And though the celestial counterpart of this member of the Pantheon of Twelve was the Sun, we suggest that his name did not mean "Sun" but was an epithet describing his functions and responsibilities. His Sumerian name Utu meant "he who brilliantly goes in." His derivate Akkadian name - Shem-Esh - was more explicit: Esh means "fire," and we now know what shem originally meant.

Utu/Shamash was "he of the fiery rocket ships." He was, we suggest, the commander of the spaceport of the gods.