On this third voyage he [Columbus]came upon more evidence of the contact between Guinea and the New World. From a settlement along the South Arnerican coast on which his rnen landed... the natives brought handkerchiefs of cotton very synmetrically woven and worked in colors like those brought frorn Guinea, from the rivers of Sierra Leone and of no difference. These were the earliest documented traces of the African presence. Within the first and second decades of the so-called "discovery" African settlements and artifacts were to be sighted by the Spanish. (They Came Before Columbus) 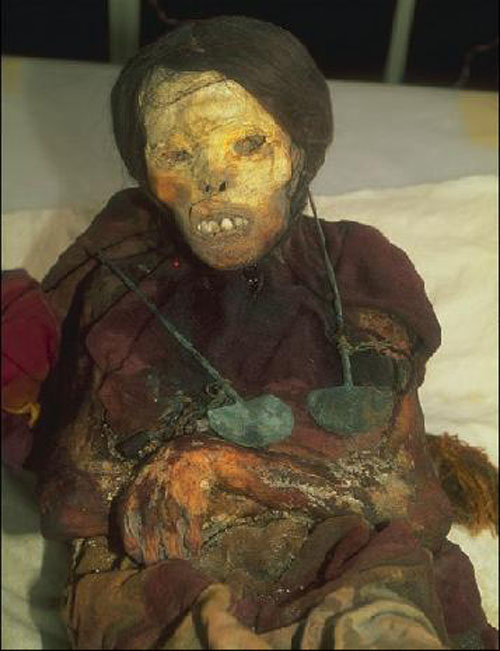 On an icy, 20,700 foot summit of the Peruvian Andes, archaeologists have found the well-preserved frozen remains of a young woman who apparently had been sacrificed to the Inca gods about 500 years ago. Her body was wrapped in finely woven wool, and she was wearing an elaborate feather headress. Around her were rare ceramics and statuettes, artifacts of the religion that took her life on the sacred Mount Ampato. (105) 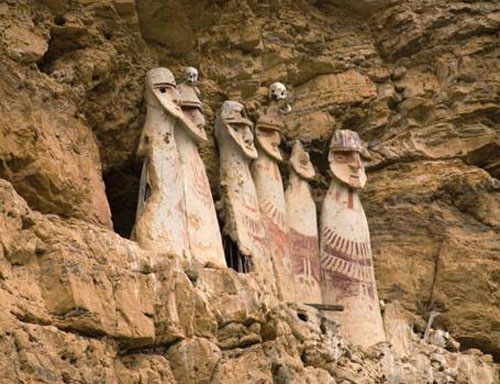 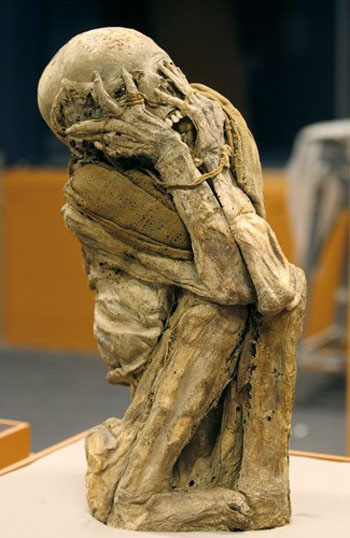 On a cliff ledge overlooking the vast Utcubamba Valley I spot five-foot-tall anthropomorphic sarcophagi of six ancient Chachapoya, gazing at the rising sun, as if the dead were watching over the living. The capsulelike coffins, made of clay and grass, and built into the cliff face between A.D. 1100 and 1300, are shielded from the rain by overhanging rock. Within them are mummy bundles holding the remains of Chachapoya elite. To reach the cliff heights, the Chachapoya may have used natural ledges, which were destroyed when they withdrew. Scholars believe a stone wall was erected around each mummy bundle. Cane poles were inserted into the walls, sort of teepee-style, and the capsules were built up and then painted. The effigies were finally "dressed" in feathered tunics and adorned with necklaces and trophy heads. The skulls may have been part of the decoration. The site is called Karijia, after a canyon below; the sarcophagi are known to locals as "ancient wise men." (106) 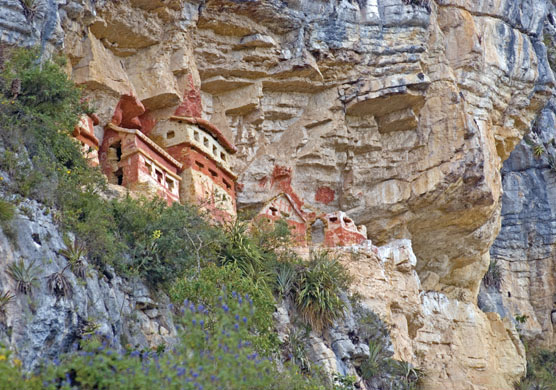 While some Chachapoya elite were buried in standing clay and grass effigies, as at Karijia, others were entombed in chullpas, brightly painted cliffside tombs, such as those found at the site of Revash. Painted in shades of red and cream, many of the chullpas have gabled roofs and are embellished with cross-shaped niches. Local farmers call the red markings and targetlike circles ojos, or eyes--ancestors keeping tabs on the living. (106)

On this third voyage he [Columbus]came upon more evidence of the contact between Guinea and the New World. From a settlement along the South Arnerican coast on which his rnen landed... the natives brought "handkerchiefs of cotton very synmetrically woven and worked in colors like those brought frorn Guinea, from the rivers of Sierra Leone and of no difference. These were the earliest documented traces of the African presence. Within the first and second decades of the so-called "discovery" African settlements and artifacts were to be sighted by the Spanish. (They Came Before Columbus)

Dress for Aztec men and women often consisted of a loincloth and a woven cloak, and brightly colored cotton fabrics were used for ornamentation. In the countryside women often went about naked to the waist, but middle- and upper-class urban women wore decorated blouses. (Patterns in Prehistory) 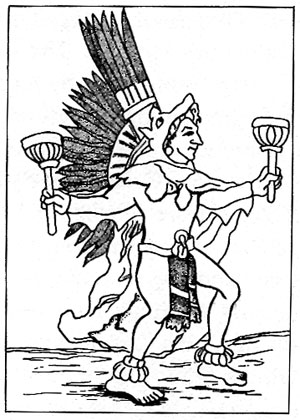 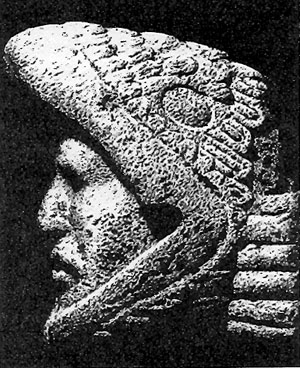 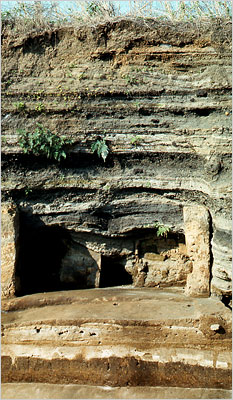 Around the year 590 AD, at the site they call Ceren in present-day El Salvador, a volcano erupted that provided remains of a village so well preserved that it has been stamped with the inevitable sobriquet of Central American Pompeii. Cotton appeared to be a major crop, he said, with the fibers used not only for the villagers' own clothing but for trade. They may have used cotton cloth as exchange material for obsidian, exotic ceramics and other imported goods found at the site. (101)

…between AD 900 and AD 1200, many other Mesoamerican elements were imported, including cotton textiles, certain ceramic motifs, pyrite mirrors, effigy vessels, cast copper bells, ear plugs, etched shell ornaments, and even parrots and macaws--probably imported from the south and kept and prized for their feathers. (Patterns in Prehistory)

A 700-year-old Norse settlement has been positively identified in Canada,... an Atlantic coastal site high above the Arctic Circle. There, they unearthed stone remains closely resembling Viking house foundations more commonly found in Greenland. ...she noticed two pieces of unusual cord that had come to light during a Baffin Island dig some decades before. Neither strand was made of animal sinew native hunters typically twisted into cordage, but yarn as characteristically woven by Viking women in medieval Greenland. she and her colleagues retrieved more local wools that had been turned into yarns—a practice unknown to Canadian aboriginals—together with a whalebone shovel like those fashioned by Greenland Vikings for cutting sod used as roofing material, and pelts belonging to Old World rats, plus large stones cut and shaped by someone skilled in European masonry techniques; Baffin Island natives did not work with large or cut stone. Most decisive were whetstones used for sharpening tools according to medieval European traditional methods. When their worn grooves were examined by energy dispersive spectroscopy, the Geological Survey of Canada detected microscopic streaks of bronze, brass and smelted iron—all diagnostic of Viking Age metallurgy. Carbon-datable materials from the Tanfield Valley centered on a mid- to late-14th-century time frame, although additional valid periods as much as 400 years earlier were also obtained. (The Lost History of Ancient America)

When Christopher Columbus and his crewmen first reached Cuba in 1492, they found that the islanders cultivated not just maize -- the firist time this cerial had ever been seen, handled and eaten by Europeans -- but also tobacco and, more important, cotton. From it the Amerindians would weave nets and beds, as well as undergarments for women. In fact it was present in such great quantities that huge basketfuls were exchanged with Spanish crewmen for simple items such as leather thongs. Archaeologists later determined that the earliest appearance of cotton in the Americas was during the third millenium BC, primarily among the Huaca Prieta culture of northern Peru. ...the variety of cotton cultivated in the New World from very earliest times is a hybrid form derived from an Old World species crossed with species native only to the American Continent. (Gateway to Atlantis)