Mifsud draws attention to the little-known Ghar Hasan cave located on a precipitous cliff-face on Malta's south coast not far from the more famous Ghar Dalam. For the first time in the long history of the cave, a repertoire of Palaeolithic art forms were partially uncovered from beneath the stalagmitic encrustations which covered them for the past fifteen millennia. The figures numbered altogether approximately 20 designs, and they are painted in red, brown, dark brown and black. They represent various animal figures, an anthropozoomorphic design, several handprints and an array of ideograms... In Panel One, at least two of the animal figures represent the elephant, 'two heavy quadrupeds with a long muzzle'. These animals were extinct in Malta before the end of the Pleistocene. (Underworld)

Take a moment to consider the six prominent black dots just above the Lascaux Bull's shoulders. It is through the comparison of these dots with the Pleiades that we can discover that the relationship between the Lascaux Bull and the constellation of Taurus is profound. Not only are these six dots the same number as the easily visible Pleiades, but they are arranged in a pattern closely resembling the spatial relationships among the members of the Pleiades, and they have approximately the same relationship as the Pleiades to the head and face of the related bull. So striking is the resemblance of this Ice Age bull to the traditional picture of Taurus that if the Lascaux Bull had been discovered in a medieval manuscript rather than on a cave ceiling the image would immediately have been recognized as Taurus. (Heaven's Mirror)

There were two massive pieces of statuary inside the Kalasasaya. One, a figure nicknamed El Fraile (The Friar) stood in the south-west corner; the other, towards the centre of the eastern end of the enclosure, was the giant that I had observed from the sunken temple. Carved in red sandstone, worn and ancient beyond reckoning, El Fraile stood about six feet high, and portrayed a humanoid, androgenous being with massive eyes and lips. In its right hand it clutched something resembling a knife with a wavy blade like an Indonesian kris. In its left hand was an object like a hinged and case-bound book. From the top of this 'book', however, protruded a device which had been inserted into it as though into a sheath. From the waist down the figure appeared to be clad in a garment of fish scales, and, as though to confirm this perception, the sculptor had formed the individual scales out of rows and rows of small, highly-stylized fishheads. This sign had been persuasively interpreted by Posnansky as meaning fish in general. It seemed, therefore, that El Fraile was a portrayal of an imaginary or symbolic 'fish man'. The figure was also equipped with a belt sculpted with the images of several large crustaceans, so this notion seemed all the more probable. (Fingerprints of the Gods)

The other great 'idol' of the Kalasasaya was positioned towards the eastern end of the platform, facing the main gateway, and was an imposing monolith of grey andesite, hugely thick and standing about nine feet tall. Its broad head rose straight up out of its hulking shoulders and its slablike face stared expressionlessly into the distance. It was wearing a crown, or head-band of some kind, and its hair was braided into orderly rows of long vertical ringlets which were most clearly visible at the back. The figure was also intricately carved and decorated across much of its surface almost as though it were tattooed. Like El Fraile, it was clad below the waist in a garment composed of fish-scales and fish symbols. And, also like El Fraile, it held two unidentifiable objects in its hands. This time the left-hand object looked more like a sheath than a case-bound book, and from it protruded a forked handle. The right-hand object was roughly cylindrical, narrow in the centre where it was held, wider at the shoulders and at the base, and then narrowing again towards the top. It appeared to have several different sections, or parts, fitted over and into one another, but it was impossible to guess what it might represent. (Fingerprints of the Gods) 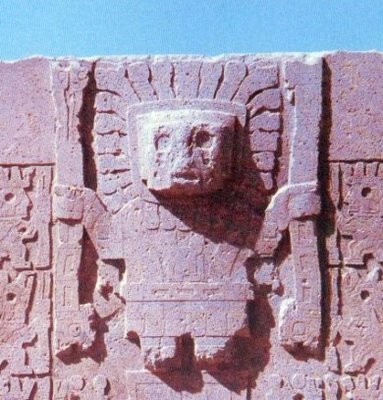 Leaving the fish-garbed figures, I came at last to the Gateway of the Sun, located in the north-west comer of the Kalasasaya. It proved to be a freestanding monolith of grey-green andesite about 12 feet wide, 10 feet high and 18 inches thick, weighing an estimated 10 tons. Its most enigmatic feature was the so-called 'calendar frieze' carved into its eastern facade along the top of the portal. At its centre, in an elevated position, this frieze was dominated by what scholars took to be another representation of Viracocha, but this time in his more terrifying aspect as the god-king who could call down fire from heaven. His gentle, fatherly side was still expressed: tears of compassion were running down his cheeks. But his face was set stem and hard, his tiara was regal and imposing, and in either hand he grasped a thunderbolt. It was a beautifully balanced piece of sculpture with three rows of eight figures, twenty-four in all, lined up on either side of the elevated central image. All that could really be said for sure was that they had a peculiar, bloodless, cartoon like quality, and that there was something coldly mathematical, almost machinelike, about the way they seemed to march in regimented lines towards Viracocha. Some apparently wore bird masks, others had sharply pointed noses, and each had in his hand an implement of the type the high god was himself carrying. (Fingerprints of the Gods) 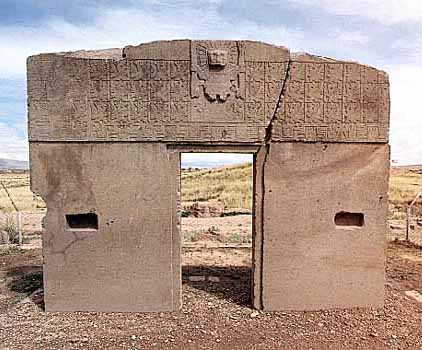 On the third column from the right-hand side (and, more faintly, on the third column from the left-hand side too) I could make out a clear carving of an elephant's head, ears, tusks and trunk. This was unexpected since there are no elephants anywhere in the New World. There had been, however, in prehistoric times, as I was able to confirm much later. Particularly numerous in the southern Andes, until their sudden extinction around 10,000 BC. I stepped forward a few paces to take a closer look at these elephants. Each turned out to be composed of the heads of two crested condors, placed throat to throat (the crests constituting the 'ears' and the upper part of the necks the 'tusks'). The creatures thus formed still looked like elephants to me, perhaps because a characteristic visual trick the sculptors of Tiahuanaco had employed again and again in their subtle and otherworldly art had been to use one thing to depict another. Thus an apparently human ear on an apparently human face might turn out to be a bird's wing. Likewise an ornate crown might be composed of alternate fishes' and condors' heads, an eyebrow a bird's neck and head, the toe of a slipper an animal's head, and so on. (Fingerprints of the Gods)

Among the riot of stylized animal figures carved into the Gateway of the Sun were a number of other extinct species as well. I knew from my research that one of these had been convincingly identified by several observers as Toxodon - a three-toed amphibious mammal about nine feet long and five feet high at the shoulder, resembling a short, stubby cross between a rhino and a hippo. Like Cuvieronius, Toxodon had flourished in South America in the late Pliocene (1.6 million years ago) and had died out at the end of the Pleistocene, about 12,000 years ago. (Fingerprints of the Gods)