The traditions of the native Upper Paleolithic Palestinians are also represented, although in the hands of the Natufians the crude stone mortars known to a few of these earlier Kebaran sites were transformed into works of art, and accompanied by marble plates and bowls, "decidedly elegant" footed vessels, and containers with meander and curvilinear designs carved in relief on the surface: a display of expertise in the grinding, pocking, and polishing of stone that is without precedent in the archaeological record of known earlier sites. (Plato Prehistorian) 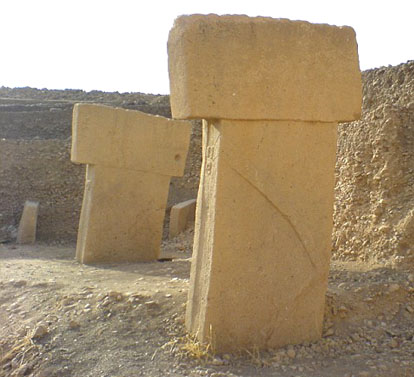 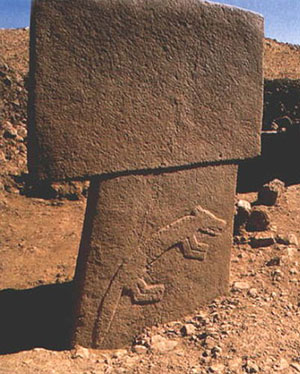 The site of Gobekli Tepe [in Eastern trukey] is simple enough to describe. The oblong stones, unearthed by the shepherd, turned out to be the flat tops of awesome, T-shaped megaliths. Imagine carved and slender versions of the stones of Avebury or Stonehenge. Most of these standing stones are inscribed with bizarre and delicate images - mainly of boars and ducks, of hunting and game. Sinuous serpents are another common motif. Some of the megaliths show crayfish or lions. The stones seem to represent human forms - some have stylised 'arms', which angle down the sides. Functionally, the site appears to be a temple, or ritual site, like the stone circles of Western Europe. To date, 45 of these stones have been dug out - they are arranged in circles from five to ten yards across - but there are indications that much more is to come. Geomagnetic surveys imply that there are hundreds more standing stones, just waiting to be excavated. (126) 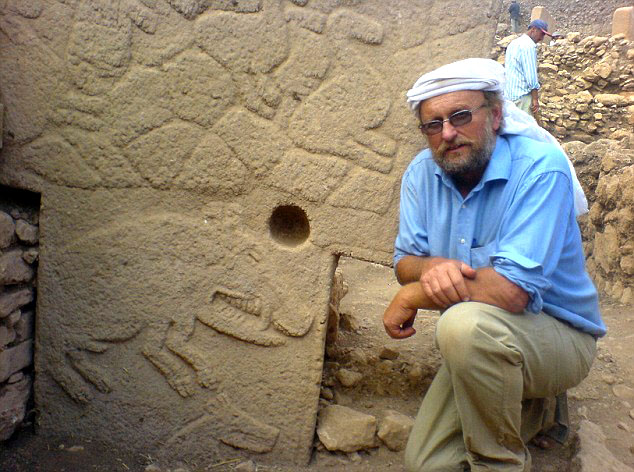 Carbon-dating shows that the complex is at least 12,000 years old, maybe even 13,000 years old. That means it was built around 10,000BC. By comparison, Stonehenge was built in 3,000 BC and the pyramids of Giza in 2,500 BC. Gobekli is thus the oldest such site in the world, by a mind-numbing margin. It is so old that it predates settled human life. It is pre-pottery, pre-writing, pre-everything. Gobekli hails from a part of human history that is unimaginably distant, right back in our hunter-gatherer past. How did cavemen build something so ambitious? Schmidt speculates that bands of hunters would have gathered sporadically at the site, through the decades of construction, living in animal-skin tents, slaughtering local game for food. The many flint arrowheads found around Gobekli support this thesis; they also support the dating of the site. This revelation, that Stone Age hunter-gatherers could have built something like Gobekli, is worldchanging, for it shows that the old hunter-gatherer life, in this region of Turkey, was far more advanced than we ever conceived - almost unbelievably sophisticated. It's as if the gods came down from heaven and built Gobekli for themselves. (126) 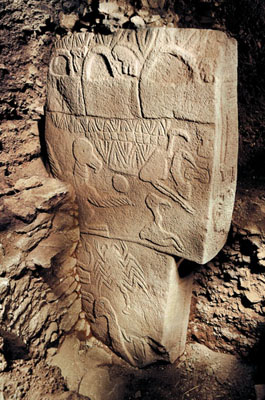 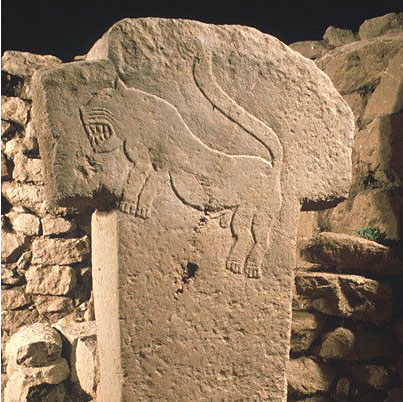 About three years ago, intrigued by the first scant details of the site, I flew out to Gobekli. ...on the day I arrived at the dig, the archaeologists were unearthing mind-blowing artworks. As these sculptures were revealed, I realised that I was among the first people to see them since the end of the Ice Age. And that's when a tantalising possibility arose. Over glasses of black tea, served in tents right next to the megaliths, Klaus Schmidt told me that, as he put it: 'Gobekli Tepe is not the Garden of Eden: it is a temple in Eden.' (126) 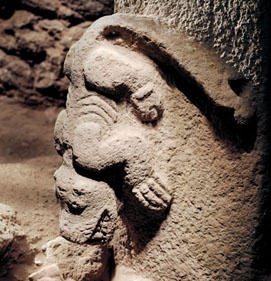 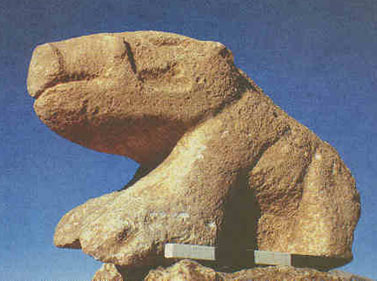 These days the landscape surrounding the eerie stones of Gobekli is arid and barren, but it was not always thus. As the carvings on the stones show - and as archaeological remains reveal - this was once a richly pastoral region. There were herds of game, rivers of fish, and flocks of wildfowl; lush green meadows were ringed by woods and wild orchards. About 10,000 years ago, the Kurdish desert was a 'paradisiacal place', as Schmidt puts it. In the Book of Genesis, it is indicated that Eden is west of Assyria. Sure enough, this is where Gobekli is sited. 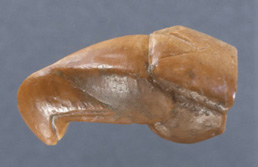 Likewise, biblical Eden is by four rivers, including the Tigris and Euphrates. And Gobekli lies between both of these. In ancient Assyrian texts, there is mention of a 'Beth Eden' - a house of Eden. This minor kingdom was 50 miles from Gobekli Tepe. Another book in the Old Testament talks of 'the children of Eden which were in Thelasar', a town in northern Syria, near Gobekli. The very word 'Eden' comes from the Sumerian for 'plain'; Gobekli lies on the plains of Harran. Thus, when you put it all together, the evidence is persuasive. Gobekli Tepe is, indeed, a 'temple in Eden', built by our leisured and fortunate ancestors - people who had time to cultivate art, architecture and complex ritual, before the traumas of agriculture ruined their lifestyle, and devastated their paradise. (126) 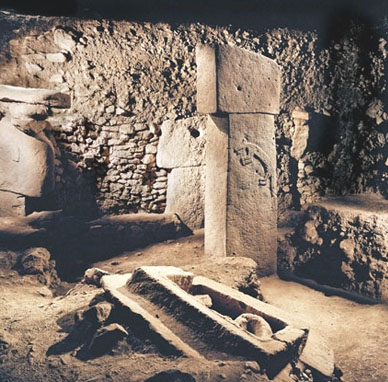 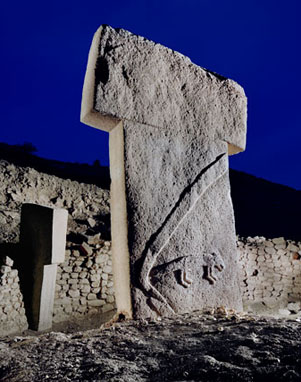 The astonishing stones and friezes of Gobekli Tepe are preserved intact for a bizarre reason. Long ago, the site was deliberately and systematically buried in a feat of labour every bit as remarkable as the stone carvings. (126) 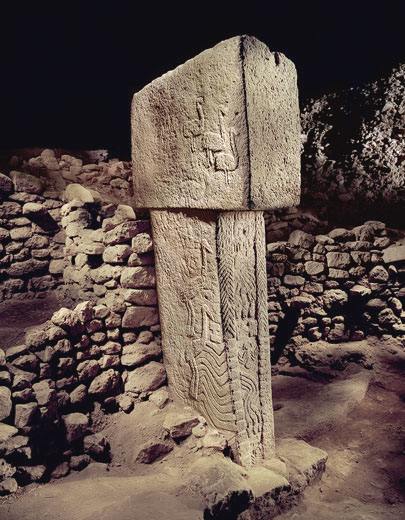 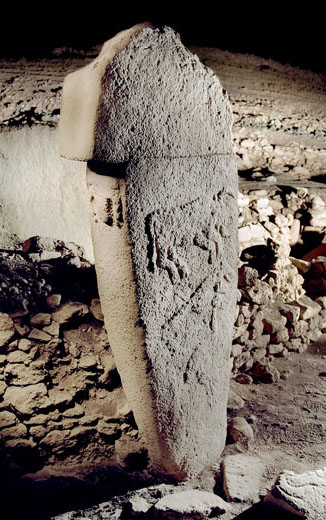 In the pits, standing stones, or pillars, are arranged in circles. Beyond, on the hillside, are four other rings of partially excavated pillars. Each ring has a roughly similar layout: in the center are two large stone T-shaped pillars encircled by slightly smaller stones facing inward. The tallest pillars tower 16 feet and, Schmidt says, weigh between seven and ten tons. As we walk among them, I see that some are blank, while others are elaborately carved: foxes, lions, scorpions and vultures abound, twisting and crawling on the pillars' broad sides....because Schmidt has found no evidence that people permanently resided on the summit of Gobekli Tepe itself, he believes this was a place of worship on an unprecedented scale—humanity's first "cathedral on a hill." (127) 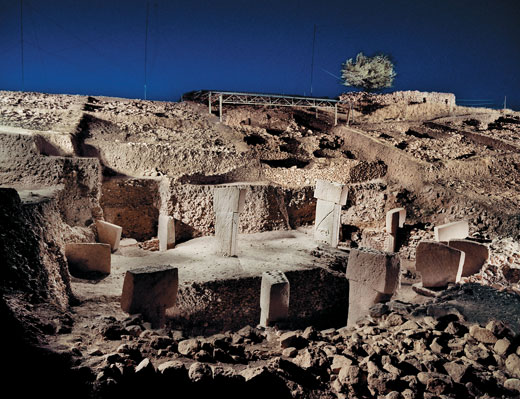 In rapid-fire German he explains that he has mapped the entire summit using ground-penetrating radar and geomagnetic surveys, charting where at least 16 other megalith rings remain buried across 22 acres. The one-acre excavation covers less than 5 percent of the site. He says archaeologists could dig here for another 50 years and barely scratch the surface. (127)

...the initial artworks of Painel do Pilão were created at “around the time that the area was first inhabited 13,000 years ago, and that those earliest images, which were probably retouched or traced more recently, were positioned in the most prominent wall locations and height.” At the very least, says Davis, the rock art and alignments at Painel do Pilão tell us that cultures in the heart of the Amazon 13,000 years ago “engaged and utilized sophisticated knowledge of astronomy maintained through rock art... (America Before) 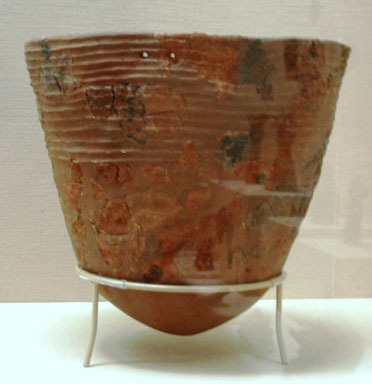 …what is truly outstanding and unexplained about these 'primitive 'hunter-gatherers' is that they were the first people in the world to invent pottery - one of the great leaps forward in human culture which, in their case, took place not just hundreds but thousands of years before anybody else. In May 2000, on my second visit to the Aomori area, I held in the palm of my hand four fragments of a broken Jomon pot 16,500 years old, Excavated at a site known as Odayamamaoto No. 1 Iseki, the potsherds had been dated using state-of-the-art AMS technology. …this prehistoric people maintained a distinct identity as a single, homogeneous group. According to Dr Yasuhiro Okada, the Aomori Prefecture's Chief Archaeologist at Sannai-Muryama, 'they were one culture, from beginning to end'. In my travels in Japan I have seen a great deal of beautiful Jomon pottery of all epochs. Made without recourse to the potter!s wheel, and always in open fires, it takes on a fantastic variety of forms - from the spectacular ‘flame pottery’ of 5000 years ago, with its grotesque and elaborate rim-work, to austere and simple rounded bowls, more than 12,000 years old that are decorated only with cross-hatch or shell-scrape patterns. The cord-mark motif keeps cropping up again and again. And other patterns repeat, such as distorted human faces sculpted into the shoulders of vases. …simple pottery representations of the human figure have been found in strata dating back more than 12,000 years. These earliest figures, and all the later examples, are known in Japan by the generic term dogu. (Underworld)